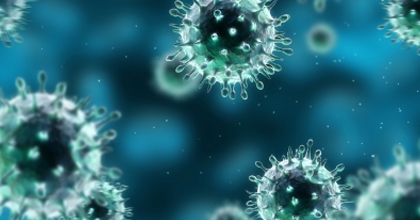 [Ed: Socionomists have long hypothesized that major epidemics tend to occur near lows in social mood. In this groundbreaking, two-part article from 2009, Alan Hall shows that indeed, throughout history, whenever social mood grows sharply more negative, society should anticipate an outbreak of one or more epidemics that often culminate in a pandemic.

Figure 1 is a chart of inflation-adjusted U.S. stock prices dating from 1888, the year Louis Pasteur opened his laboratory and the approximate advent of germ theory, which radically improved medicine. Prior to this period, epidemic disease was far more prevalent than it is now across the entire timeline–but nonetheless it occurred a significant majority of the time during bear markets. In Figure 1, we have shaded the bear markets and marked with arrows the three periods of major U.S. epidemics, which in each case breached human defenses near the ends of social mood declines that lasted twenty years on average.

The (Sentimental) Picture of Health
In May 2003, Robert Prechter described how society’s optimism generated an attitude of entitlement:

Personal health itself is now considered a natural condition that only incompetent doctors could disrupt, as reflected in the historically unprecedented number and size of malpractice awards bestowed upon customers of doctors by U.S. courts. Whether the causes of a long term change in attitude ultimately are political or microbial, the current attitude is not likely to be maintained indefinitely. The specters of AIDS and roving nuclear weapons are two concerns that might be taken as foreshadowing, along with evidence of an extreme in the worldwide financial mania of the past few years, a major change in today’s historically high level of human health and social stability.[1]

Our analysis suggests that human health and quality of life have passed a historic pinnacle, the point from which major declines begin. Confidence and complacency are hallmarks of extremes in positive social mood. Recall that in the late 1960s—near a major peak in inflation-adjusted stock prices that held for 27 years—Surgeon General William Stewart famously declared that it was time “to close the book” on infectious disease. Yet new outbreaks have come steadily, including Legionnaire’s disease, hantavirus, West Nile virus, drug-resistant tuberculosis, AIDS, salmonella, bird flu and the threat of old diseases returning through drug-resistant bacteria and viruses.

… Threats on the Horizon

Food Supply: Peppers, Peanuts and Poisoning
The food supply is fragile in at least two major ways: (1) The inventory-management model of just-in-time delivery has produced a food-supply pipeline that is only about two or three days long, which is systemically vulnerable to interruption. (2) The nation’s food safety net has big holes, as demonstrated by at least 26 reported outbreaks of E. coli infection traced to green leafy vegetables since 1993, plus two separate food-borne salmonella outbreaks within 10 months in 2008 and 2009. …

Health Care
The bear market will bring some degree of breakdown in the health care system.

Health insurance companies are facing losses and will raise premiums, and one of their first cuts will be in their coverage of debt-strapped people. Advocacy group Families USA says that 54 percent of the nation’s unemployed can’t afford private insurance and aren’t covered under Medicaid. People with acute health problems will end up in emergency rooms, causing longer ER waits and a financial drain on hospitals, many of which may have to close, increasing the burden on those still open. A May 26 AP article about the precarious state of local health departments says that “last year at least 10,000 local and state health department jobs were lost to attrition and layoffs, including at laboratories that identify disease strains.”

In the remainder of this major, fourteen-page article, author Alan Hall:

Sounding an ominous warning, Hall also writes, “We are about ten years into the current bear market. Social stress is rising as we approach another of the dangerous junctures, with this one far bigger than the previous three.”

previous post [Article] Have We Seen The Peak In Radical Islam?
next post [Article] Sky High Construction? Not in Saudi Arabia or Dubai
Back to top
mobile desktop