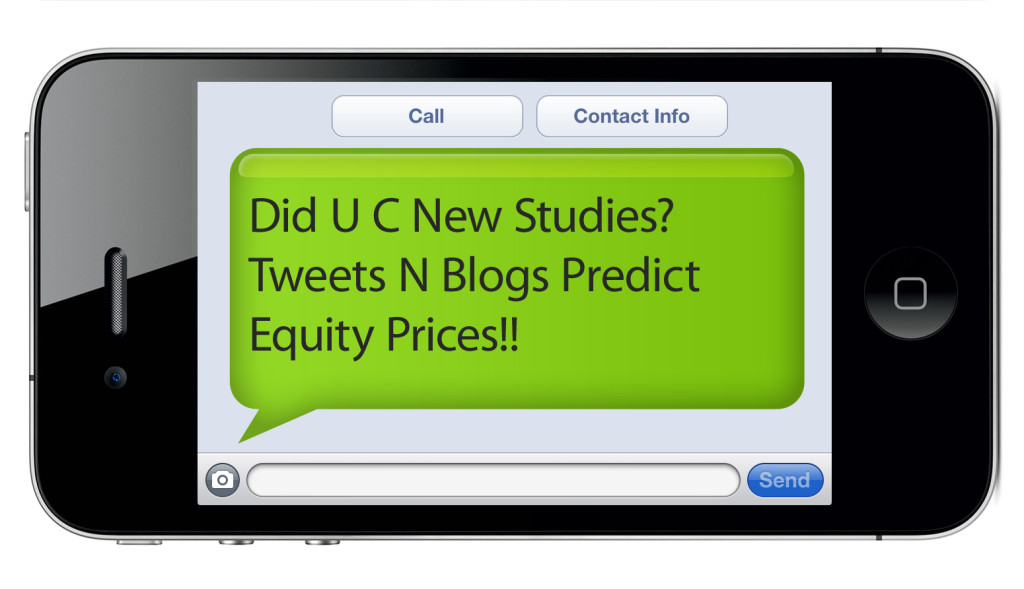 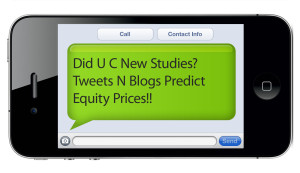 Recently published and preliminary work from researchers at four universities indicate that trends in social mood as displayed in social media predict price moves in the stock market. The studies provide important further evidence of the socionomic hypothesis: that changes in states of unconscious social mood precede—because they motivate—changes in the stock market and other social events.

Like many Socionomics Institute and Foundation projects, these studies suggest a causal relationship between social mood and stock prices. The results challenge conventional economic and financial theory. Socionomics is the only theory available that accounts for these results.

We begin with the promising efforts of Peter Gloor of MIT, who is analyzing “the positive and negative mood of the masses on Twitter.”1 Next we report on Eric Gilbert and Karrie Karahalios of the University of Illinois at Urbana-Champaign, who have surveyed posts to the popular blogging platform, LiveJournal.com, for expressions of uncertainty and fear.2 We end with Johan Bollen and Huina Mao of Indiana University-Bloomington and Xiao-Jun Zeng of the University of Manchester, England. Their widely covered research analyzed words describing happiness, calmness, kindness and other expressions of emotions in Twitter posts.3 In each case, the researchers compared the emotions expressed in social media to price changes in the broad stock market indices days later. In every case, they found that stock price changes did not precede but rather followed mood changes.

Robert Prechter’s 1999 book, The Wave Principle of Human Social Behavior (HSB), listed 35 sets of polar emotions that social mood seems to regulate. Examples of the positive and negative poles include confidence/fear, adventurousness/protectionism and optimism/pessimism. HSB proposed that the aggregate emotions a society expresses depend on the direction and intensity of its underlying mood.

What are Twitter and LiveJournal?
Twitter is an online social media service that enables a user to post on a personal page any thought he or she likes—with a 140-character limit. Twitter notifies followers of the post. Twitter currently processes 65 million posts (called “tweets”) per day from an estimated 175 million users. Academics and market professionals are increasingly viewing this data set as a source of real-time information about what users (and in some ways, society at large) are thinking and feeling. For example, a June 2010 study by MIT’s Peter Gloor measured Twitter traffic on upcoming film releases and used the results to make accurate predictions of box office returns.4

LiveJournal is an online journal, or blog—a platform that accepts more lengthy posts than Twitter. Its history is longer than Twitter’s and therefore it possesses a longer-term data set.

The MIT Study in Progress
The study by MIT’s Gloor randomly sampled Twitter posts and searches for the emotive keywords “hope,” “fear” and “worry.” So far, his research has produced intriguing results: Increases in the use of the three words correspond positively to the VIX (the S&P 500’s volatility measure) and negatively to stock prices.

His findings also fit one of socionomic theory’s subtler claims. Wall Street considers hope and fear to be opposites. Gloor’s results, while preliminary, suggest that hope and fear both reflect negative mood. This finding fits our depiction of “uncertainty” as an expression of the fear that accompanies a trend toward negative mood; in 1999, Prechter posited that “certainty” is a better term than “hope” for the antithesis of fear, explaining his choice as follows:

… [P]eople equate uptrends with predictability and downtrends with unpredictability. The Harper’s Weekly quote from 1857 includes the phrase, “never has the future seemed so incalculable as at this time.” Translation: “The market has been falling for several years.” The media constantly characterize market setbacks as injecting “uncertainty” into a picture of the future that presumably was previously as clear as crystal. I am not exaggerating when I say that this foible is timeless. Just this month, after a three-month decline in the Dow and a six-month decline in the Value Line index, The Wall Street Journal says, “The prevailing sentiment among investors these days appears to be confusion. And confusion is costly after so many years of predictability.” Translation: “After going up for years, the market has trended down for several months.”5

To put this in simple words, when the emotions on Twitter fly high, that is when people express a lot of hope, fear, and worry, the Dow goes down the next day. When people have less hope, fear, and worry, the Dow goes up. It therefore seems that just checking on Twitter for emotional outbursts of any kind gives a predictor of how the stock market will be doing the next day.

Gloor goes on to say that much work remains before his team verifies the hypothesis scientifically. But to date, Gloor’s results seem to align with socionomic theory.

The LiveJournal Paper: “Widespread Worry and the Stock Market”
Authors Gilbert and Karahalios created a program that searches LiveJournal posts for words associated with fear and anxiety to build what they call an Anxiety Index. The program assessed 20 million entries that bloggers posted over a nine-month period in 2008, or roughly 74,000 declarations of emotion every day.

The authors then compared trends in the posts to movements in the stock market. Similarly to Gloor, they discovered that spikes in worry preceded stock market losses by two days.

Gilbert and Karahalios caution that their study has several limitations. For example, they cite a paper that finds that bloggers tend to be younger than the general population. They also note that some LiveJournal bloggers speak not only of their own emotions but of those of the people around them. For socionomists, the former points present only a small concern, as a subgroup’s mood often reflects that of the larger group. The latter point in  fact increases the likelihood that those posting comments are reflecting the mood of the larger group.

The Twitter Paper: “Twitter Mood Predicts the Stock Market”
In their landmark study, Johan Bollen, Huina Mao, and Xiao-Jun Zeng were the first to assess whether Twitter posts predict market movements. Their paper in the Journal of Computational Science has received a great deal of attention in the mainstream press. The three authors set up a three-day, preceding-value indicator as a control. The control correctly predicted the direction of the fourth day’s DJIA close 73.3% of the time. Then the researchers assessed 9 million tweets over a span of 9 months in 2008 using a program to comb the tweets for words expressing six different emotional states: Calm, Alert, Sure, Vital, Kind and Happy. They created a seventh category that categorized each tweet as positive or negative and designed a model that would predict the direction of the stock market based on the prevalence of that emotion.

The most effective indicator was Calm, which was correct 86.7% of the time, improving the control 13.4 percentage points. Negative spikes in Calm (in other words, an indication of anxiety or uncertainty) correlated with decreases in the stock market. Conversely, emotionally quiet days—those registering high levels of calmness—portended rises in the DJIA. These results coincide with socionomics’ view that calm certainty and anxious uncertainty are expressions of positive and negative social mood, respectively.

Researchers Express Surprise at Results
The revelation that expressions of social mood preceded stock market changes surprised the researchers involved in the two Twitter studies. In an interview with Johan Bollen, NPR reported6:

As Bollen explains, when he began his study, he expected that the mood on Twitter would be a reflection of up and down movements in the stock market. He never imagined it would be a precursor … .

“And then she said, ‘There’s one more thing you should know. I had to shift the mood curve forward in time by three or four days.’”

Gloor’s blog also mentions surprise at the similar effects of hope and its opposite, fear and worry. Originally, Gloor surmised that hope would have an inverse correlation with the VIX. He actually found the opposite:7

Surprisingly, we found positive weak but insignificant correlation for both “hope” and “fear” or “worry” with VIX, and negative significant correlation with both “fear” and “worry” and “hope” with Dow, NASDAQ and S&P 500. (This means that people start using more emotional words such as hope, fear and worry in times of economic uncertainty.) We therefore created a simple Twitter-volatility index combining mentions of hope, fear and worry, normalizing it with the total amount of tweets per day as a baseline. This index displays strong significant negative correlations to Dow, NASDAQ and S&P 500, and strong significant positive correlation to VIX.

Our Assessment and What This Could Mean for Socionomics
The researchers in these three studies showed that expressions of social mood change before the stock market changes. That mood arises first and motivates social actions is, of course, a cornerstone of socionomic theory. Robert Prechter has long discussed the idea that changes in social mood precede and cause various social actions, including stock sales and purchases.

The studies leave us to ponder this question: Is society expressing its mood via these social media even more instantaneously than via stock sales and purchases? Perhaps. For now, the fact that academics outside of the Institute and Foundation are exploring these ideas reveals a new hunger for alternative explanations of market causality. That these alternatives are consistent with socionomic theory is highly encouraging.

Note: Professors Gilbert and Bollen and PhD candidate Huina Mao will be presented at the Socionomic Institute’s Summit on April 16 at the Georgia Tech Conference Center in Atlanta, Georgia. For details, click here.

1 Gloor, P.A. (2010, August 5). Predicting stock market indicators through twitter “i hope it is not as bad as i fear” [Web log message]. Retrieved from http://goo.gl/kHYaP.

2 Gilbert, E., and Karahalios, K. 2010. Widespread worry and the stock market. In Proceedings of the International Conference on Weblogs and Social Media.