[Ed: The Tea Party movement was born in the negative mood climate of anger that grew around the March 2009 low in the stock market and continued to simmer throughout 2010. But in the past several years, the movement has suffered plummeting voter interest. In this timely report from 2011, socionomist Alan Hall hypothesizes that a roaring smaller degree social mood rally was behind the drop in the Party’s popularity.]

Figure 1 compares interest in the Tea Party  to prices of U.S. stocks. The first sharp spike in searches on Google.com for the term “Tea Party” closely followed the March 2009 low in  the Dow Jones Industrial Average. That is the point at which the Tea Party began its nationwide protests and adopted the Gadsden Flag—originally an emblem of colonial America’s angry revolt against British rule—as its symbol.

Subsequent spikes in Tea Party searches occurred on tax and election days, when news about the group climaxed, according to a daily index of references by major media(not shown). But in general, as social mood continued to rally in late 2010, interest in the Tea Party waned. Indeed, across its short life so far, the Tea Party seems to have had greatest appeal when social mood as registered by the Dow has trendied negatively or when people are at their most angry and fearful for other reasons. 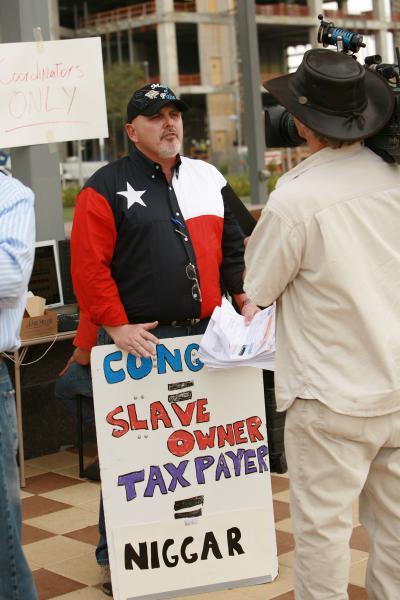 Vitriolic Past: The self-proclaimed founder of TeaParty.org carried a controversial sign at the February 27, 2009 Tea Party in Houston. The word at the top of the sign is “Congress.” (Image courtesy of the Washington Independent)

The Tea Party’s proponents in Congress have also tempered their vitriol in the elevated social mood environment. ABC News reported on April 20, 2011, “They swept into power on a wave of popular enthusiasm less than a year ago, but it’s not so easy being a Tea Party Congressman these days.” One freshman Tea Party House Representative communicated the difficulties in being a Tea Party legislator in a mixed-mood period: “I desperately want to vote ‘no’” on raising the debt ceiling, but “I also desperately don’t want [the economy] to crash.”1 … .

In this two-page article, Hall graphs the results from two polls measuring favorable / unfavorable views of the Tea Party Movement. He also explains why a revival of the movement is likely in coming years.

If you’re interested in American politics—or are part of the political process in any country—you should take a closer look at Hall’s study.