You’ve probably heard plenty of depressing numbers about how far price home prices have fallen, so I ain’t going there. I will note that it’s been a long time since I’ve read one of those media stories about how the real real estate crisis was only concentrated in Florida, Arizona, and California.

The psychological shift away from “always rising” home prices has rippled out in many ways. Among lenders, the sentiment turned from widespread approval of “liar’s loans” to a stinginess that would shame Ebenezer Scrooge.

Yet among many home buyers, the mood went from “what’s the most I can’t afford,” to…

…Well, in some cases to homes that look like this: 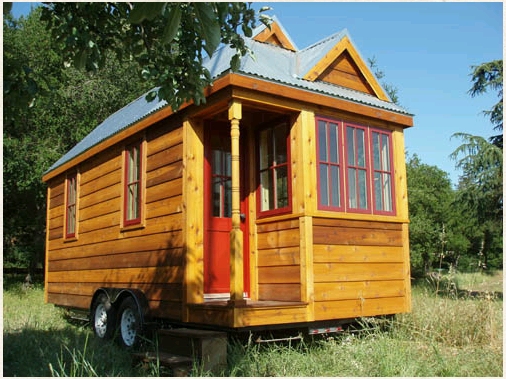 Welcome to the “Small House Movement” — and no, I am not making this up.

The average size of a new home in the U.S. had climbed for decades, peaking just above 2,500 sq ft in 2007 (up some 40% since 1978). So when long-term social mood changed from positive to negative, the difference went much deeper than the mere economics of lending & borrowing; the new trend includes a willingness among many people to embrace what is extravagantly small.

The Small House Movement has spawned books, websites, and DIY builder plans for $99, plus lots of media coverage — such as the recent “Tiny Homes Carve a Niche” article in The Wall Street Journal (Jan 30).

But, as always, news reporting is information after the fact. In contrast, the March 2011 issue of The Socionomist described where long-term social mood is heading: “Watch society turn from…McMansions to… humble homes,” and to “redefine ‘normal’ to mean less conspicuous consumption.”

The August 2011 Socionomist further explored the change in attitude, complete with a chart labeled “McMansions no more” and a discussion of how the “emerging trend is one piece of evidence that the deflationary mindset is growing in America.”

You can read the Aug. 2011 article on housing, with our compliments — it appeared as a “Guest Commentary” from Peter Atwater, former Managing Director at JP Morgan and a speaker at the 2012 Social Mood Summit in Atlanta this April 14. Follow this link to read his article, and click here for more information about the Socionomics Summit.■