For those of you who have been living under a rock for the past 50 years instead of listening to rock, Paul McCartney was part of arguably the world’s most famous band: The Beatles.

And this year is the 50th anniversary of when the Fab Four — McCartney, John Lennon, George Harrison and Ringo Star — played together for the first time.

Here at Elliott Wave International, we are big-time Beatles fans, and when we love a subject, we analyze it.

As the top-selling ensemble in music history, few would argue against the Beatles’ importance to rock ‘n’ roll. Many people even extend the Beatle’s influence to society as a whole. For instance, any barber of the 1960s will testify to the group’s influence on men’s hairstyles. Of course, this is all old news to Beatles fans. So what’s there to say about the Beatles that hasn’t already been said?

Socionomists have a new and unique take on the Beatles — an interesting, in-depth history that reflects the shifting society of their time.

In a 40-page analysis with a full career breakdown and charts, Robert Prechter’s report “Social Mood Regulates the Popularity of Stars — Case in Point: The Beatles” provides remarkable insights to the band’s trajectory.

Prechter explains that the success of the Beatles flowed from “the ability of four young musicians to serve as a focal point for the expression of mass spontaneous joy and excitement that was already there.”

Prechter puts the popularity of The Beatles into a context no one else has explored before. 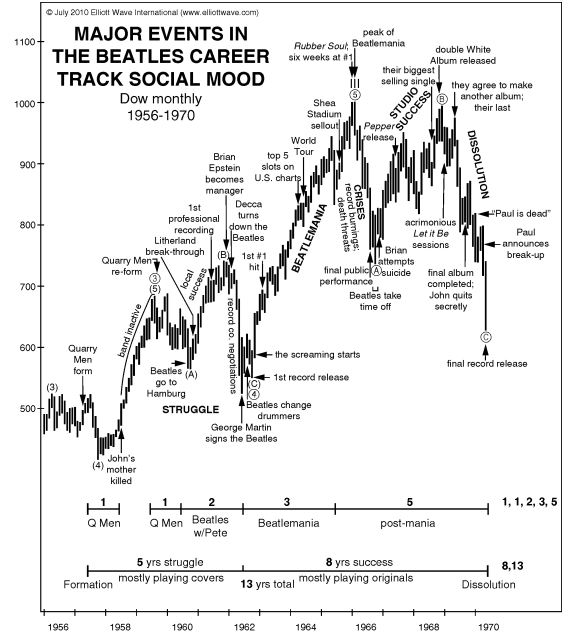 A brief history of the Beatles as it relates to our best sociometer — the stock market — should help elucidate the case for socionomic regulation of the popularity of famous people. The main general point of this review is to show that the radical shifts in the Beatles’ fortunes followed quite precisely the radical shifts in the stock market’s fortunes.
—Robert Prechter, July 2010

If you love The Beatles, and you want to read their history in a new and revealing light, click here to download Robert Prechter’s 40-page analysis of the world’s most famous band, “Social Mood Regulates the Popularity of Stars — Case in Point: The Beatles.”

To get a new and revealing look at the world around you — including social trends in music, fashion, war, peace, disease and much, much more — click here to learn more about The Socionomist, a monthly publication that delivers next month’s and next year’s news today.

You can also sign up to get free updates on the most recent socionomic trends.