A political columnist looking at the unemployment numbers recently asked: “Given the state of the economy, by any historical standard, Barack Obama should be 15 points behind Mitt Romney. Why is he tied?” (In fact, most polls show Obama slightly ahead.) The answer is that it’s not primarily “the economy, stupid”; it’s how people feel.

Our study, “Social Mood, Stock Market Performance and Presidential Re-Elections: A Socionomic Perspective on Voting Results,” shows a significant positive relationship between net changes in stock prices prior to Election Day and incumbents’ prospects for re-election. We contend that A is not causing B here. The stock market does not reliably affect elections, and election outcomes do not reliably affect (either prospectively or retrospectively) the stock market. Our hypothesis is that changes in social mood simultaneously regulate significant changes in the stock market and people’s opinions about the political leader. C, a hidden variable, is influencing A and B.

What Matters, What Doesn’t

In reaching these conclusions, we tested two measures of stock-market performance: nominal prices and inflation-adjusted prices. The latter measure neutralizes the effect of monetary expansion. We included this measure because we wanted to make sure we were consistently recording changes in stock values apart from changes in the measuring unit.

To assure robustness, we tested popular vote margin, electoral vote margin and simple win/loss with all available data going back to 1792. We found strong correlations in all cases. We also tested stock-market performance 1, 2, 3 and 4 years prior to elections and found all of them to be significant. The 3-year span was the most significant. We think this result makes sense anecdotally, since people tend to credit or blame the predecessor for conditions during the first year of a new president’s term.

A Positive Trend in Social Mood

No specific election outcome is ever assured, but we can say that social mood has become much more positive during Mr. Obama’s tenure as President, elevating his chances for re-election. All four of the stock-market durations used in our tests—currently dating from November 1, 2008, 2009, 2010 and 2011—are positive, in both nominal and inflation-adjusted terms. Given the net inflation during this time, the inflation-adjusted measures are less positive. Through the close of October 18, 2012, the in-progress 4, 3, 2 and 1-year gains in the Dow are 43%, 36%, 20% and 14%. Those in the Dow/PPI are 29%, 25%, 14% and 15%. So, the 3-year-period gains to date are 36% (Dow) and 25% (Dow/PPI), both positive. Even though the economy remains weak, the three-year trend toward more positive social mood should have made voters less inclined to express bad feelings toward the leader. Reflecting this expectation, polls consistently show President Obama scoring high on the “likeability” scale despite widespread misgivings about his economic policies.

The Elliott wave model of aggregate financial pricing offers the best context in which to understand social mood. We excluded discussion of it in our paper, but its nuances are informative. For example, stock market advances can occur within bull market waves or bear market waves, and they differ. A “bear market rally” under this fractal model has a qualitative definition and is not simply denoted by size. When the stock market advances for several years within a larger-degree bear market, the positive trend in social mood is tempered by a larger trend toward negative mood, usually generating decidedly mixed feelings toward the leader.

In accordance with this condition, U.S. presidents serving during the bear-market-rally years of 1842-52, 1966-8 and 1970-73 did not enjoy the same degree of admiration that presidents presiding over bull markets did. Presidents John Tyler (1841-1845), James K. Polk (1845-1849), Millard Fillmore (1850-1853, filling the term of the deceased Zachary Taylor) and Lyndon Johnson (1964-1969), who served during rallies within larger bear markets, did not go on to serve additional terms. Richard Nixon, who served during a bear market rally (the second one within the corrective pattern, not the first, which is probably an important difference) was re-elected in a landslide. These presidents’ experiences are instructive. Tyler was expelled from his own party and was disinvited to run again; Polk declined to run; Fillmore’s party fell apart, and he was not re-nominated; Johnson was so unpopular (and ill) that he did not seek re-election; and Nixon was hounded from office less than two years after his re-election triumph.

All of these events are compatible with the Elliott wave model in that, despite a rising stock market, the larger-degree trend in social mood was toward the negative. By my interpretation (which may or may not prove correct), President Obama has likewise been serving during a bear market rally, so despite the strong rise in stock prices during his tenure he should be as vulnerable to mixed mood as were his predecessors who served at similar times. The accompanying chart shows these periods. 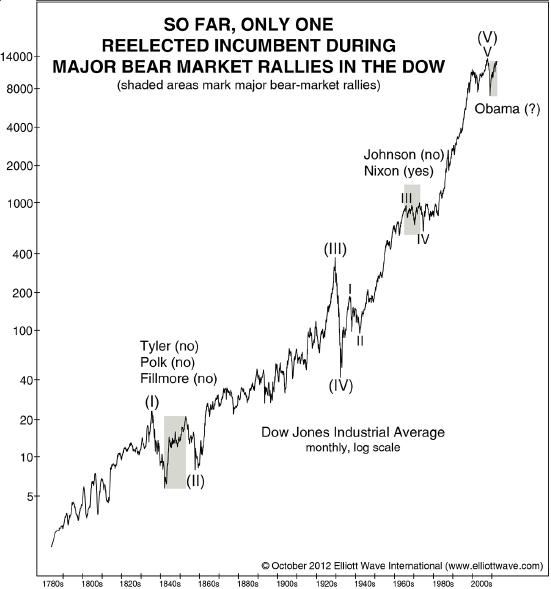 Obama’s precarious position is further exacerbated by the fact that the inflation-adjusted New York Composite index, which comprises all stocks on the New York Stock Exchange, is down 6.4% since its high eighteen months ago. This broad, real loss neutralizes the moderate gains since that time in the nominal blue-chip averages.

If the election were held today, Obama would probably win. Accordingly, if the respite toward positive mood keeps the market up until Election Day, Obama will probably win.

But Election Day is not yet here, so we lack two weeks’ worth of data. On rare occasions, a lot can happen to the stock market in two weeks, as we saw in October 1987. Within this mixed-mood environment, an outsized stock market fall between now and Election Day might indicate a mood reversal big enough to generate a loss for the incumbent, much as the two-month stock market decline into Election Day 1976 led to Gerald Ford’s narrow loss that year.

Here’s an interesting question: Should either candidate really want to win? My time-series analysis—admittedly a highly speculative venture—suggests that the next four years will feature a trend toward negative mood strong enough to turn the sitting President into some combination of Herbert Hoover and the second-term Richard Nixon. So, I recommend that you vote for whichever candidate you like the least.