[Ed: What can secret agents and haunted houses tell us about the social mood? A lot, according to socionomics.

[In this fascinating article, Chuck Thompson explains that the films that are popular at a given time manifest the then-current social mood of a society. Here is an excerpt of Thompson’s October 2012 report, released during a period of deeply mixed mood in the U.S. as evidenced by a powerful bull-market rally in stocks.]

A New Bond for a New Day?

Writer Ian Fleming created the book version of the James Bond character in 1952, near the beginning of the postwar bull market. Beginning 10 years later with Dr. No, there have been 23 official films in the series, and their success has waxed and waned with the stock market.

…Figure 1 (updated to 2012), from the April 2007 Theorist, shows the popularity of Bond films (as surveyed by IMDb.com) against the inflation-adjusted Dow. Socionomist Mark Galasiewski wrote in the Theorist:

[Bond’s] popularity first peaked with the third film in the series, Goldfinger, almost in line with the DJIA in the mid-1960s. The first leg down of the subsequent bear market produced a spoof of the series, also titled Casino Royale (1967). The franchise continued to suffer as the bear market wore on; its ratings bottomed with Never Say Never Again (1983) and A View to a Kill (1985), shortly after the bear market ended in 1982. The popularity of the character returned to favor with the 1980s and 1990s bull market before bottoming again with the stock market in 2002. It reached a new all-time high along with the Dow in 2006’s Casino Royale. 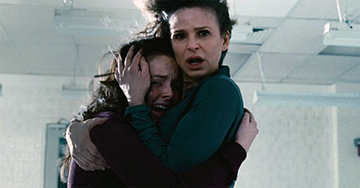 Scared All the Way to the Bank: The Possession ended up with the second-best Labor Day Weekend opening of all time. (Source: Beyond Hollywood)

Indeed, IMDb gave Casino Royale a 7.9 rating. But the next film in the series, Quantum of Solace, was released in the downturn of 2008 and received a far less glowing 6.8.

What about the newest Bond film, Skyfall? Considering the influence of positive mood—as reflected by the current rally in the markets—Skyfall is likely to be rated very highly.  [Ed: As of October 30, 2012, the film had an IMDb rating of 8.4 after openings in non-US markets.] …

… Kids’ Flick Fails as Dark Movie Prevails
The Socionomist has looked at recent films’ increasing horror, gore, violence and negative outcomes. This trend toward dark themes was established again during the 2012 Labor Day weekend, when the kids’ flick The Oogieloves in the BIG Balloon Adventure recorded the worst opening weekend ($443,901) of all time for a film playing in more than 2,000 theaters.6 That same weekend, The Possession, a horror flick about a girl controlled by an ancient malevolent spirit, earned the second-best gross ever ($21.3 million) for a Labor Day weekend movie.7 …

Read the rest of this three-page article to learn why horror movies such as The Possession are thriving in the box office and why people are flocking to radical haunted houses that inflict intense psychological torment—all while the bull-market Bond series thrives.

(Bonus: A newly-released Japanese product lets you express and share your emotions with an attachable tail.  Seriously! This brief aside should fascinate anyone interested in tracking human emotion.)