Timing is everything – even to libertarians. True, critics have always been hard on Ayn Rand’s Atlas Shrugged, describing the novel as “near perfect in its immorality” and “shot through with hatred,” but I can’t help but wonder if I shouldn’t send filmmaker John Aglialoro a quick note about social mood. After all, you’d think someone might have made the connection that the first signs of life for an Atlas movie in years occurred within a month of the end of the devastating 2008-2009 bear market in stocks and accompanying global financial collapse. Read this excerpt from the April 1, 2009 Hollywood Reporter: “Hollywood soon could be going Objectivist. After decades in development hell, Ayn Rand’s capitalist-minded ‘Atlas Shrugged’ is taking new steps toward the big screen — with one of the film world’s most prominent money men potentially at its center. … ‘This couldn’t be more timely.’”  But no, Aglialoro missed the connection. He released Part I in April 2011 after a 6000 point rally in stocks, and it got panned. Part II came out last week. The Chicago Tribune savaged the film: “‘Atlas Shrugged,’ and so will most everyone else. ‘Atlas Shrugged: Part II’ is a stupid person’s idea of what a smart movie sounds like.”

Click here to read about the fluctuating popularity of anti-status-quo ideas. 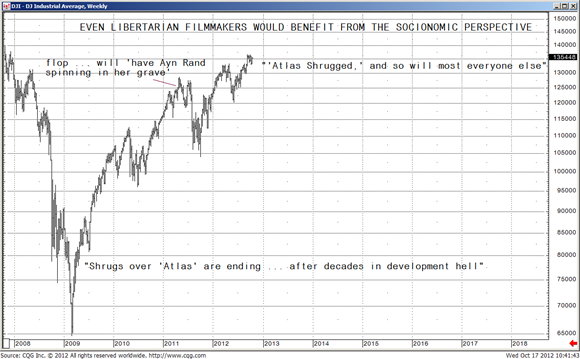