[Social Mood Watch] A “Who’s Who” of Prominent Socionomists 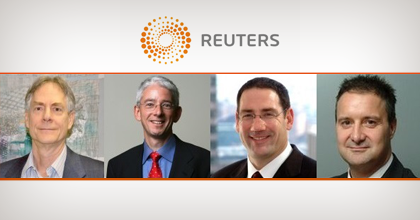 Reuters reporter Atul Prakash quotes a “Who’s Who” list of prominent socionomists – Robert Prechter, Peter Atwater, Murray Gunn, Terry Burnham – in an article about using social mood to forecast the financial markets. According to these practitioners, record prices at art auctions and popularity of luxury vacations are signs that the market may be reaching a top. As Prechter elaborates in the article, “Two dozen stock market sentiment indicators show record or near-record optimism, suggesting the stock market is a lot closer to a top than a bottom.” Here’s an excerpt from Prakash’s June 18 article:

To gauge the mood and the likely impact on markets, behavioral analysts look at traditional measures such as investment polls and options but also at social media, including Twitter and Facebook, and even at developments in art and sport.

The theory goes that people make bad decisions at moments of extreme fear or optimism and that studying their behavior could provide clues to where equities are headed.

Now may be just such a moment.

“Markets either have topped or will soon top, based on the behaviors I see outside of the markets, especially in art, automobiles and residential real estate,” Peter Atwater, president and chief executive of Financial Insyghts, a firm based in Mendenhall, Pennsylvania, that advises on how social mood affects decision making, said.

Atwater cited an Aston Martin car fetching a record $4.85 million at auction in May, a New York sale of Christie’s Post-War and Contemporary Art setting 37 records last month, and holiday firm Abercrombie & Kent adding a second departure to its 19-day tour of Africa by private jet after the first sold out.

Behavioral analysts term the 140 percent rise in major indexes since 2009 the “rich man’s rally”, and say the behavior of the uber-rich reflects peak-of-the-market sentiment.

Their views are in sharp contrast with many traditional analysts, who bet an improving global economic outlook, along with better company fundamentals, will take indexes to new highs in coming months despite recent “healthy” corrections.

One non-traditional expert who accurately predicted 2007’s stocks bust and the recovery in 2009 is Robert Prechter, whose Socionomic Theory of Finance suggests social mood causes economic and political events instead of the other way round.

“Two dozen stock market sentiment indicators show record or near-record optimism, suggesting the stock market is a lot closer to a top than a bottom,” said Prechter, founder of the U.S.-based Socionomics Institute.

To measure mood, Prechter looks at investor polls, buying in stock option contracts and polls of feelings of well-being.

“In the past century at least, optimism this extreme has occurred only twice before, in 2000 and 2007,” said Prechter, whose theories have influenced many others.