By Alan Hall | Excerpted from the July 2013 Socionomist

Politicians attempt to steer their careers in certain directions, but oftentimes, social mood takes the helm.

In this article, socionomist Alan Hall explains that changes in social mood can propel public figures from acclaim to ignominy, and vice-versa, from abhorrence to adoration.

In the Socionomics Institute’s January 2012 paper, “Social Mood, Stock Market Performance and US Presidential Elections: A Socionomic Perspective on Voting Results,” Robert Prechter et al found “a positive, significant relationship between the incumbent’s vote margin and the prior net percentage change in the stock market.” The findings strongly suggested that Obama would win reelection in November 2012. Socionomists have used the idea that “voters unconsciously (and erroneously) credit incumbents for their positive moods and blame incumbents for their negative moods” to make some strikingly accurate forecasts regarding the fate of US presidents.

In a section titled, “Herding and Leader Selection: Two Results of a Single Cause: Social Mood, Which Follows the Wave Principle,” Chapter 16 of Robert Prechter’s The Wave Principle of Human Social Behavior (1999) reviewed some previous forecasts. One concerned Ronald Reagan during the aftermath of the Iran-Contra investigation. Many speculated that the scandal would—at a minimum—forever tarnish Reagan’s reputation. The January 1987 issue of The Elliott Wave Theorist disagreed. “Given the outlook for the stock market going into 1988, the Teflon will undoubtedly return, and President Reagan will eventually exit as the most loved president in U.S. history,” it said. “The next guy probably won’t be so lucky.”

And indeed, the next president, George H.W. Bush, proved not so lucky. He started strong, as most newly elected presidents do during their “honeymoon,” and the romance blossomed further as the Dow rallied 21% during his first seven months in office. This trend culminated in Time’s August 21, 1989 cover (below), which acclaimed Bush as “smarter than Reagan, less driven than Carter and savvy like Nixon.” A year later, the August 1990 issue of The Elliott Wave Theorist wrote about the cover, “This is a classic depiction of a President at a major market top, reflecting good times and an upbeat public mood.” 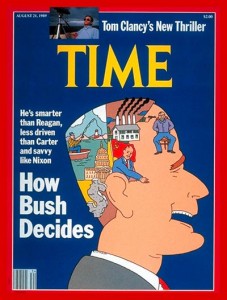 Upbeat was right. Time titled its flattering article, “Mr. Consensus,” reflecting the cooperative and inclusive mood of the day. During bear markets, on the other hand, society is more likely to dub a president “Mr. Contentious.” 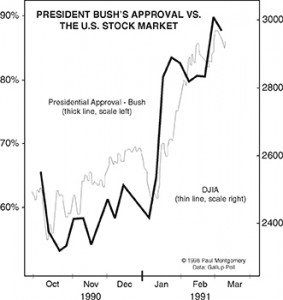 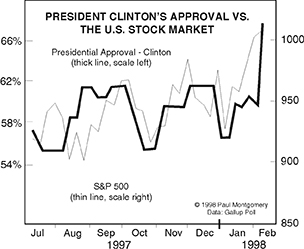 Figures 1 and 2 (above) are from Chapter 16 of Robert Prechter’s book The Wave Principle of Human Social Behavior (1999). Both charts show that judging stock values and judging leaders are behaviorally similar to each other.

When the Dow slid 21% from mid-July to mid-October 1990, the Value Line index fell nearly to its 1987 low and the Dow Transports finished a collapse of 47%, the press no longer regarded Bush as a political genius. In October and November, they bombed him with derisive headlines and comments such as, “Bush May Have Lost 1992 Already,” … “The Carterization of Bush,” “Is Bush Presidency Headed for Doom?” and “a quagmire of indecision and ineptitude which could take him the rest of the Presidency to dig out.” … Just four months after the press unleashed its blizzard of derision, the Dow had soared back to 3000. George Bush’s approval rating soared right with it, to 91%, the highest in the history of the records [at that time]. The media loved him again. 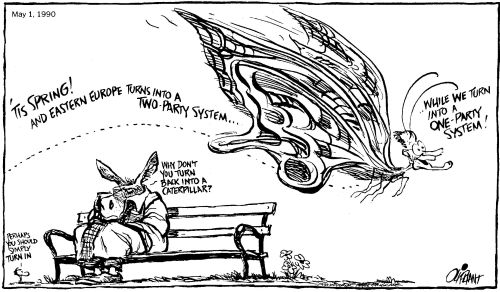 An Apt Metaphor: “The problem with butterflies is that they only survive one season.”

Alongside that Time cover, EWT showed this flattering May 1990 Wall Street Journal cartoon (above). But EWT wrote:

The problem with butterflies is that they survive only one season. July statistics show that Bush’s approval ratings have slipped slightly … This is only the beginning. Over the remainder of his term, look for a persistent, unrelenting change in the general assessment of his performance, which increasingly will be seen as inadequate, and eventually as downright lousy. … “The Republican presidential nominee … will lose the 1992 election by a huge margin … .”

[The record shows] the same ebbs and flows with stocks and the economy as did those for George Bush, Sr. … There are times when these lines diverge, but when they do, it is always in the direction of the lagging economic statistics. [For more on lagging economic effects of mood change, see the December 2012 issue of The Elliott Wave Theorist.] It is never due to the president’s actions apart from those. … Obviously there is little rational thought attached to the very visceral connection among mood, herding and the assessment of leaders. … In January 1998, USA Today summed up the influence of a persistent positive social mood trend on the image of the leader when it said, “President Clinton is the most resilient survivor of scandal in modern American history.” The “Teflon coating” that has allowed scandalous allegations of all kinds to slide off his back is simply the sheen of a positive social mood deep in people’s minds, which is reflected in rising stock prices.

Figure 3 gives a longer-term view of the upward trend in Clinton’s job approval ratings that accompanied the powerfully positive social mood trend during his presidency. Clinton’s approval peaked in December 1998, almost midway between positive extremes in two important sociometers: the April 1998 peak in the Value Line Composite Index [not shown] and the January 2000 peak in the Dow. 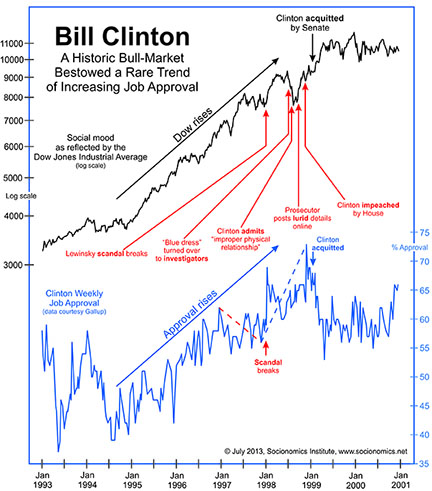 Note that some of the most serious events in the Monica Lewinsky sex scandal coincided with the largest downturn in the DJIA during Clinton’s presidency. Yet, as the Dow recovered, so did Clinton’s approval ratings. And despite a $70-million prosecution of Clinton’s related perjury and obstruction of justice charges, the Senate acquitted the President—as the stock market, and therefore social mood, broke out to a historic positive extreme.

On September 6, 2012, The Washington Post asked, “Is Bill Clinton one of the best presidents in history?” A few days later, a New York Times/CBS News poll found that Clinton “is more popular now than at any time during the 20 years since his emergence as a presidential candidate, with two-thirds of registered voters viewing him favorably … .” This despite his lying, both in court and to the public.

Clinton wasn’t the first president to bask in the sweet adoration bestowed by a trend toward positive social mood.  The August 1990 Elliott Wave Financial Forecast quoted the January 1987 issue of The Elliott Wave Theorist, and then went on:

“Reagan will eventually exit as the most loved President in U.S. history.” Many observers predicted otherwise … but the waves and cycles knew better. When Reagan finally rode into the sunset, he was a hero. ‘Man of the Decade? Man of the Century!’ concluded a Wall Street Journal headline in December 1989, crediting Reagan, the national figurehead for the 1980s’ social mood, with the rollback of Communism.

Of all US Presidents since Franklin Delano Roosevelt (the beginning of the data), only FDR had a stronger uptrend in job approval during his term than did Clinton. The DJIA rose 203% during FDR’s tenure and 202% during Clinton’s. In fact, the only US president who enjoyed a larger positive trend in social mood was Calvin Coolidge from August 1923 – March 1929. The DJIA increased by 264% during that period, and the United States enjoyed an “era of prosperity and rare good feeling,” according to the narrator of an early movie reel showing Coolidge and his family. That was before presidential job approval ratings existed, however.

Figures 4 and 5 plot George W. Bush’s and Barack Obama’s approval ratings versus another sociometer, the Dow Jones Industrial Average valued in ounces of gold. As you can see, both presidents’ approval trended similarly to the Dow/gold ratio. 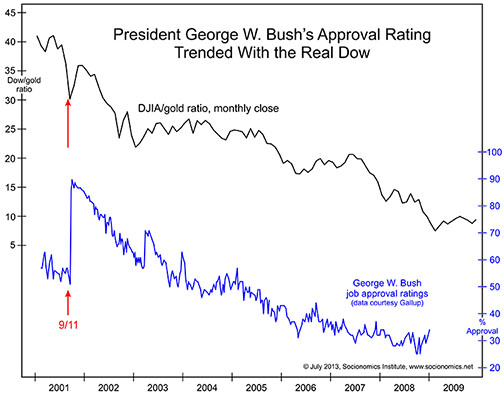 In Figure 5, note that both the Dow/gold ratio and Obama’s approval ratings hit lows in August 2011. Obama’s ratings have diverged noticeably to the downside so far in 2013; it will be interesting to see how it will resolve. 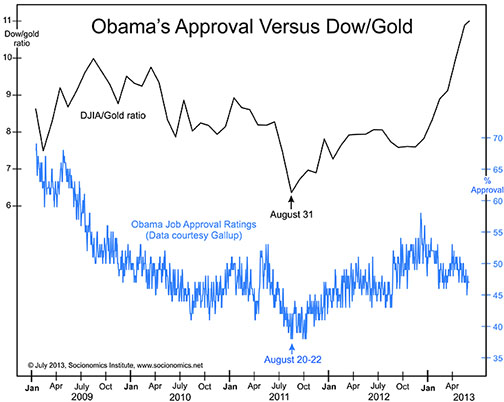 Presidential approval ratings tend to trend lower during a President’s term of office. (Click here to see Wikipedia’s handy charts showing this tendency.) We surmise that the more a president’s popularity bucks this inherent drift, as did FDR and Clinton, the more likely it is that a strongly positive social mood trend is under way.

In the rest of this major, ten-page article, author Alan Hall: