[Mood Riffs] A Dictatorship in Russia? 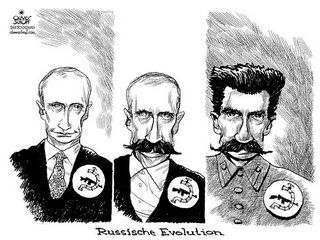 On July 18, Reuters reported: “Russian opposition leader Alexei Navalny was sentenced to five years in jail for theft on Thursday, an unexpectedly tough punishment which supporters said proved President Vladimir Putin was a dictator ruling by repression. … Since Putin returned to the presidency … women from the punk band Pussy Riot have been jailed … 12 opposition activists have gone on trial [for protesting] his inauguration [and another] protest leader, Sergei Udaltsov, is under house arrest.”

Notwithstanding that the RTSI has bounced nicely from its 2009 low, it is still down almost 50% from its May 2008 all-time high, a trend that seems to reflect the longer-term public mood influencing Putin. In December 2007, Alan Hall wrote: “The world may see an even darker side of Putin. History gives examples of how Russian leaders behave in bear markets. It is not a heartening record.”