[Ed: Can you predict where the winner of the next Solheim Cup will be from? Socionomists can.

In this article, guest commentator Kevin Armstrong reveals that markets – as reflections of social mood – have had an uncanny ability to forecast the results of professional golf team competitions such as the Ryder Cup, awarded to male professionals of Europe, and the Solheim Cup, the females’ equivalent.

Here is an excerpt of Armstrong’s October 2013 article.]

The pulse of golf, particularly professional golf, has mirrored the pulse of the stock market for more than a century. The roots of this relationship are far from obvious, but in my opinion, the connection is far stronger in golf than in any other sport.

This observation gets to the heart of what drives the ebb and flow of markets: aggregate social mood. Mood has been reflected in the swings in fortunes of professional golfers virtually since professional golf began. …

If golf is a reflection of social mood, and if a region’s social mood is more positive, making its stock market perform better, then that region’s professional golfers should do better. In the males’ team competition, the Ryder Cup, that has indeed been the case. Throughout the Ryder Cup’s early history, before World War II, the relative performances of the stock markets on the two sides of the Atlantic were very even, as were the relative results of the golfers’ teams. This changed after the war, when both American golfers and the American stock market dominated. This domination continued until the early 1980s. 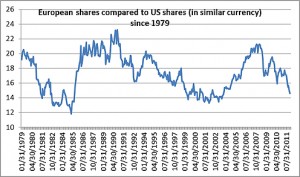 The trend of American dominance began to weaken in 1983, when America prevailed by only the narrowest of margins. It ended two years later when America lost the cup for the first time in 28 years. This shift is clearly seen in the relative performance of the stock markets on the two sides of the Atlantic.

Figure 1 … shows the relative performance of the European market to the US market in a constant currency ever since the Ryder Cup started to become a close contest again with the inclusion of European golfers. When the line is rising, European markets have been been performing better, and when it is falling, the US has been in the ascendency.

The reversal in the relative out-performance of the US ahead of the 1985 Ryder Cup is obvious. That shift put Europe ahead of the US in the two years since the 1983 contest. It was an indication that social mood in Europe had, on balance, been more positive than in the US over that period. Against that backdrop, Europe went on to win the Cup. And ever since, whichever side’s stock market has performed the best since the last contest has gone on to win the cup a remarkable 83% of the time. …

Read the remainder of this two-page article to discover how American and European female golfers in the Solheim Cup exhibit the inverse relationship to social mood and the markets.