By Chuck Thompson | Excerpted from the September 2012 Socionomist

In August 2011, the city of London boiled over. Rioters set fire to buildings and vehicles during four days of intense social unrest. But just four months before then, Londoners were joyfully Tweeting about the royal wedding. What changed?

Researchers at the University of Bristol found that London’s social mood – and Tweets – turned increasingly negative after the wedding and plunged just before the riots erupted.

In this article, Chuck Thompson provides a socionomic explanation of the study results. He goes on to explain the relevance of Twitter as a social mood monitor. Here’s a short excerpt.

The researchers examined a pair of major one-time events: the announcement of major UK budget cuts on October 20, 2010, and the August 2011 riots in London and other UK cities. They chose the events based on the severity of sentiment surrounding them, which they calculated by “counting the frequency of emotion-related words in each [Tweet] published on a given day.” More precisely, the researchers listed words commonly associated with anger, fear, joy and sadness. Their lists included 146 anger words, 92 fear words, 224 joy words and 115 sadness words. The researchers then compared the mean of the emotional intensity 50 days before and after each day in the time period, ultimately identifying the days that were followed by the greatest rate of change for the next 50 days compared to the previous 50 days. 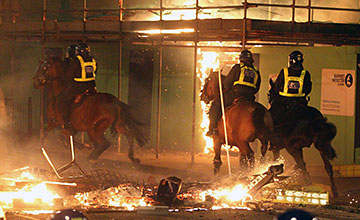 Hot Pursuit: Mounted police officers chase rioters amid the flames in Totterham, where the riots began.

…A Socionomic Look at the Researchers’ Findings

The researchers’ goal was to “see if the effects of social events can be seen in the contents of Twitter, and to speculate if some of them could even be predicted.”

They determined that the UK budget cuts announcement had an effect on emotion (they used the term “mood”) in the United Kingdom after the event. But in the case of the UK riots, they found something different: an increase in negative words before the event—a discovery that runs counter to conventional, event-driven causality. The authors wrote: “[W]e have seen signals preceding the riots that could possibly be used as indicators. For this conclusion to be reached in more certain ways, we need more data, but we observe that a steady increase in anger was observed in the weeks preceding the riots.”

Socionomics, of course, provides an explanation for these findings. …

Read the remainder of the four-page article to discover the important distinction between mood and emotion. Learn about the social mood environments of these two key events, and why the severe UK budget cuts triggered no riots like the ones that erupted less than a year later.