By Chuck Thompson | Excerpted from the June 2014 Socionomist

In 1950, Christine Jorgensen traveled to Denmark to begin the transition from a man to a woman. News about her broke in 1952 in the midst of a large-degree positive mood period, as measured by a 24-year bull market in inflation-adjusted stocks. 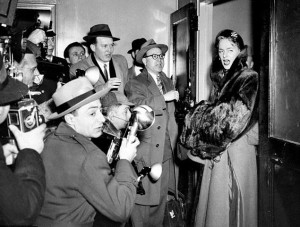 According to The New York Times, Jorgensen was “sensationalized in the daily tabloids.” She was the object of headlines such as, “Bronx ‘Boy’ Is Now a Girl” and “Dear Mum and Dad, Son Wrote, Have Now Become Your Daughter.” And, when she returned to the US in 1953, she faced a barrage of questions from the media, which made her an object of ridicule. She was denied a marriage license in 1959, and her male fiancé lost his job when his engagement to Jorgensen was made public.

Two years later, transsexual model April Ashley was rising through the ranks of the fashion world, appearing in magazines such as Vogue and becoming a female sex symbol and lingerie model. But in 1961, when a friend told the British news media that Ashley had once been a man, the news amounted to a scandal that forced her out of fashion.

As social mood began trending negatively in the late 1960s, acceptance of blurred gender expressions increased. And unlike the reception given to Christine Jorgensen and April Ashley, cross-dressers Jackie Curtis, Candy Darling, and Holly Woodlawn were featured in films and written about in popular music. The three caught the attention of artist and filmmaker Andy Warhol, who cast them in movie roles and included them in a group of celebrities known as “Warhol Superstars.”

Darling was the inspiration for the 1969 Velvet Underground song “Candy Says” and was mentioned along with Woodlawn and Curtis in Lou Reed’s 1972 hit, “Walk on the Wild Side.”…

In the remainder of this eight-page article, author Chuck Thompson reviews the next 32 years of transgender expressions in society, including a post-2000 explosion in transgender manifestations in media, sports, culture, and fashion. Thompson also discusses two related negative mood trends: a declining birth rate and a fracturing of identities within the LGBT community.