[Article] From the Dot-Com Bubble to Big-Brother Panopticon: An Update on Authoritarianism in the US and Elsewhere

By Alan Hall | Excerpted from the September 2014 Socionomist

In his April / May 2010 study, socionomist Alan Hall said that clashes between authoritarians and anti-authoritarians would increase around the globe. In the four years since, stories about government surveillance, spying, threats to privacy, whistleblowers, and militarized police actions have become fixtures of the daily news cycle.

In this September 2014 report, Hall updates all of his original analysis and explains how negative social mood at a large degree is driving the trend.

Here is an excerpt of the article.

2010 Forecast: “Governments will increasingly employ technology to monitor and control their citizens.”

Figure 5 is from Google’s November 2012 Transparency Report, which said, “This is the sixth time we’ve released this data, and one trend has become clear: Government surveillance is on the rise.”71 Between early 2010 and 2012, government requests for user data increased by 56%. But we may never again be able to update this chart with US data. In October 2013, the US Department of Justice “rejected the formal request of Google, Facebook and other Internet giants to share government user data requests with the public.”72 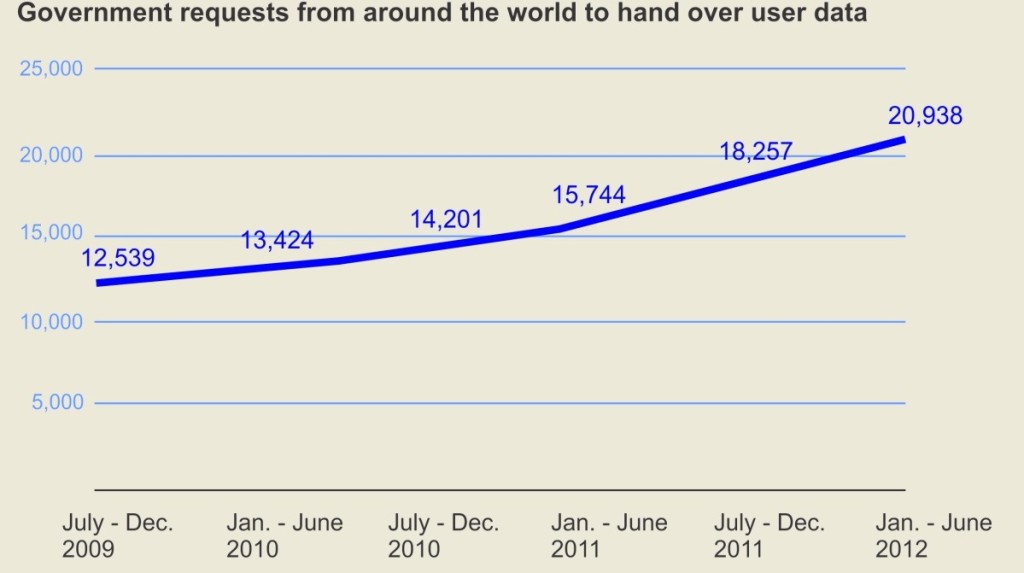 On October 30, 2013, USA Today reported that the National Security Agency secretly collects vast amounts of information flowing between the data centers of Yahoo and Google. The NSA calls the program MUSCULAR, and it has international reach that far surpasses PRISM, a similar program previously disclosed by Edward Snowden.73 Yahoo and Google aren’t alone in taking the threat seriously. “[Companies] are building technical fortresses intended to make the private information in which they trade inaccessible to the government and other suspected spies.”74 …

The November 2006 home invasion and shooting death of 92-year-old Kathryn Johnston by a SWAT team in Atlanta has become an infamous case. Balko wrote that the federal investigation following the shooting,

… found out that police corruption – from lying on search warrants to raiding wrong houses – was rampant in Atlanta.  It also became clear that the city’s narcotics officers had quotas. … to arrest so many people or seize a minimum quantity of drugs each month.  These numbers, in turn, were used to help evaluate performances, calculate raises, and determine promotions.103

Balko added that the militarization of police departments across the country,

… has violated the spirit of the Posse Comitatus Act, a Civil War-era law prohibiting police from enlisting active-duty soldiers for civilian law enforcement. Instead of bringing soldiers in, we’ve encouraged police officers to use the tactics and adopt the mindset of soldiers. The outcome has been just as troubling.103

On October 22, 2013, demonstrators protested an “epidemic of police brutality” in cities across the US.104 The recent case of a North Georgia child maimed by a ‘flash bang’ grenade tossed into his crib by police during a botched drug raid attracted worldwide media attention. The Habersham County sheriff in charge of the raid expressed regret, but said,

Our team went by the book. Given the same scenario, we’ll do the same thing again. I stand behind what our team did. … The person I blame in this whole thing is the person selling the drugs… . They are no better than a domestic terrorist… . 105 …

Continue reading to learn how you can survive the increasing surveillance and repression.