[Article] Shikhar Agarwal Sets His Sights on Stocks and Shootings

By Chuck Thompson and Matt Lampert | From the March 2015 Socionomist 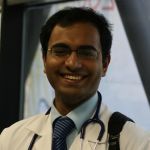 Dr. Shikhar Agarwal’s fascination with human biology began in high school. He went to medical school in his native India and completed a Master of Public Health degree at Johns Hopkins in the US. He then moved to the Cleveland Clinic, where he earned the title of best graduating resident and has continued his training in the nation’s top-ranked fellowship program in cardiovascular medicine.

His time in the US entailed a number of new cultural experiences, including exposure to American crime trends and politics. In particular, he became interested in the American discourse on gun violence. “There is so much controversy about what should be done about firearm-related mandates in the United States,” said Agarwal. “Especially since I didn’t grow up here, I was kind of intrigued by what it is that drives firearms-related injuries.”

Agarwal began his search for an answer by going straight to the data. As a physician, he was familiar with the Nationwide Inpatient Sample, which bills itself as “the largest publicly available all-payer inpatient health care database in the United States.”1 He knew that firearms-related hospitalizations carried a unique code in the dataset that would allow him to identify and compile them. He tallied the annual hospitalizations from 2000-2011 and plotted the data on a chart. What he saw next came as a surprise.

Dr. Agarwal’s findings dovetail nicely with an article in the August 2012 Socionomist in which Alan Hall showed an inverse relationship between the NYSE Composite Index and the number of people killed or wounded in multiple-victim shootings in the US from 2005-2012.2 More broadly, Dr. Agarwal’s work plugs into the socionomic literature on social mood’s concurrent influence on stocks and health.

More researchers are now beginning to study the stock market as a leading indicator for health trends. Dr. Agarwal pointed in particular to a 2010 Duke study that showed that there was a higher incidence of heart attacks in 2008-2009 during the financial crisis.3 More recently, a 2014 paper found that there were declines in mental health and increases in smoking, binge drinking and deadly DUI car crashes associated with big down months in the stock market.4 “It is a new field, and people are starting to look into it,” Agarwal said. We believe that as they do, they will uncover more and more evidence in favor of the socionomic insight.

Watch Dr. Shikhar Agarwal and the ten other excellent presentations from the 2015 Social Mood Conference right now from your PC or mobile device via an on-demand broadcast>>

(Socionomist subscribers: Log in for your complete, exclusive archive.)