[Article] Conflict or Cooperation: In North Korea It’s a Matter of Social Mood

By Chuck Thompson | Excerpted from the May 2015 Socionomist

Since the end of World War II, North Korea has displayed sharply differing levels of cooperation on the international stage. Might its inconsistency have something to do with social mood?

The socionomic roots of North Korea’s history reach all the way back to the nation’s founding. Following World War II and the end of the Japanese occupation of Korea, Soviet troops occupied the northern half of the country and US troops occupied the south. In May 1948, South Korea elected a national assembly, which adopted a constitution that established a presidential form of government. On August 15, 1948, the Republic of Korea (South Korea) was formed. Less than a month later, the communist Democratic People’s Republic of Korea (North Korea) was established under Premier Kim Il Sung, who claimed authority over the entire Korean peninsula. In June 1950, Kim’s forces invaded South Korea, launching the Korean War. As Kendall observed, the conflict, which involved South Korea, the US, the UK and a UN alliance on one side and North Korea, China and the Soviet Union on the other, occurred “near the end of a [large-degree] bear market pattern in the inflation-adjusted Dow.”

North Korea has pushed to establish its own nuclear deterrent since the war, when the US threatened to use nuclear weapons against it. As early as 1952, North Korea created an institute and an academy to facilitate nuclear research. Four years later, it began sending scientists and technicians to the Soviet Union for nuclear training. The effort culminated in the Yongbyon Nuclear Scientific Research Center, North Korea’s major nuclear facility.

In 1980, the KOSPI entered a sideways correction that would last five years. At the beginning of this negative mood trend, North Korea secretly purchased Soviet R-17 (SCUD-B) missiles in Egypt. It reverse-engineered the missiles and began to produce simplified copies. It attempted to use the technology to build long-range ballistic missiles that could carry nuclear warheads — a step that would establish it as a major nuclear threat. But the correction ended in 1985, and North Korea swiftly changed its stance. It joined the international Treaty on the Non-Proliferation of Nuclear Weapons (NPT), which required the country to halt nuclear weapons development and pursue only the peaceful use of nuclear technology. 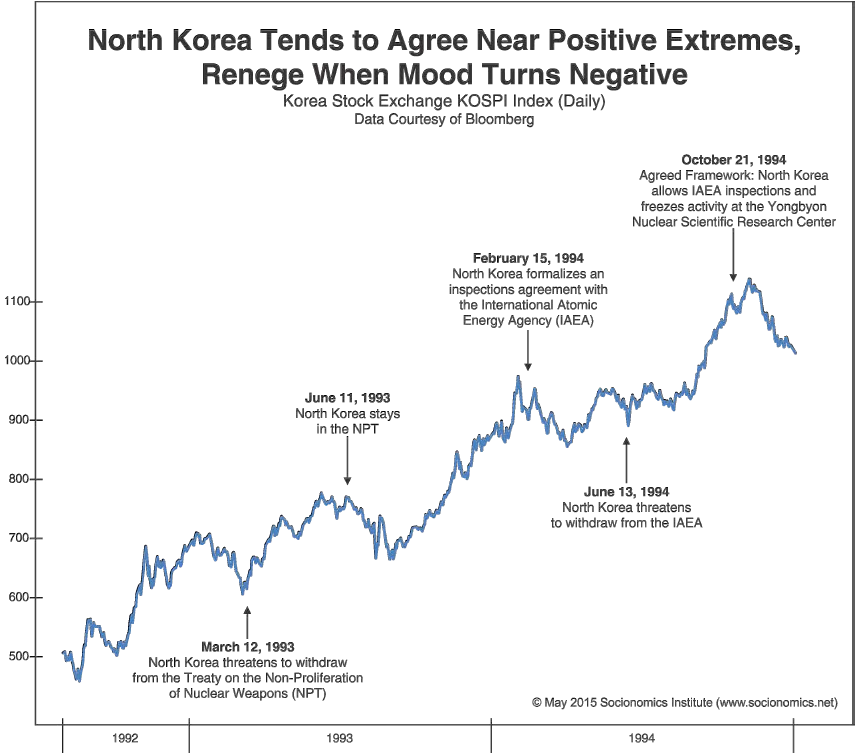 North Korea abided by the NPT throughout the remainder of the 1980s bull market. But in the early 1990s, sentiment turned negative in both the US and the Korean peninsula. Relations grew tense as US concerns over North Korea’s nuclear program escalated. On March 12, 1993, North Korea announced it would withdraw from the NPT. The announcement came within 10 days of a low in the KOSPI (Figure 1). Three rounds of intense bilateral negotiations with the US ensued during advances to new all-time highs in the Dow and a three-month rally in the KOSPI. With the mood trend inclining both sides toward a settlement, North Korea reversed its decision to withdraw from the NPT on June 11 — within five days of the peak of the KOSPI’s rally and a day before the withdrawal would have taken effect. …

Read the rest of this 7-page article to learn how social mood drove North Korea’s levels of international cooperation in the two decades that followed. Discover what Thompson believes is next for North Korea’s diplomatic relations and arms negotiations.