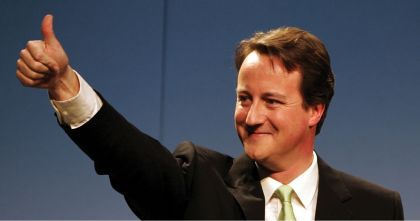 So the pollsters told us that the UK election was a dead heat. They were dead wrong. Our tools anticipated the outcome without polling a single person.

On Election Day in 2012, our research group published a study on stock market performance and the fates of incumbent US presidents who ran for re-election. The message was clear: presidents in office during big rises in the stock market historically have a much better chance of staying in power than those who preside during big declines. The stock market had soared during President Obama’s term, and sure enough, voters kept him in the White House.

We wanted to see if we could use the same tools to make sense of elections in other countries. Europe was an obvious place to turn because, at the time, incumbents were getting kicked out all over the place. A glance at European stock indexes told the story. The market was down in nearly every case where a country’s leader lost power. And the market was up in the countries where leaders were retained. Of the 15 countries we studied, Sweden was the only case where the election results didn’t sync with the market’s trend.

So let’s fast-forward to the 2015 UK General Election. The polls showed a neck-and-neck race between the Conservatives and Labour. But what did the stock market show? In our elections research, we measure the net change in the market during the leader’s term in office, barring the first year since that’s when credit or blame for the country’s fortunes tends to go to the predecessor. The British stock market’s benchmark FTSE 100 Index was up more than 16% over Prime Minister David Cameron’s past four years in office and even recently registered a new all-time high, which spelled good news for the Conservatives. Welcome to five more years on Downing Street, Mr. Cameron.

So what’s the connection between stocks and politics? Some researchers say that voters simply use the stock market as a kind of financial barometer and make their decisions in the voting booth accordingly. Some people might do that, but we don’t think that’s really what’s driving the relationship. For instance, we found that the stock market was a good predictor of US election results in the 1800s when almost no one owned stocks or paid much attention to the market’s fluctuations. Our theory is that the stock market and elections are two domains where people express social mood, their underlying optimism and pessimism. When society is in a positive mood, people are more inclined to speculate in the stock market and retain leaders. When society is in a negative mood, people are inclined to do the opposite. And of course, people express optimism and pessimism in all sorts of ways, including the songs they download, the movies they go to see, their propensity toward supporting peace or war, and even in their decisions to have children. Since people can act to trade stocks almost instantly in response to changes in mood, we use the stock market as a leading indicator to forecast many of these other social behaviors, including the results of elections. To learn more about socionomic theory and what we do at the Socionomics Institute, check out www.socionomics.net.