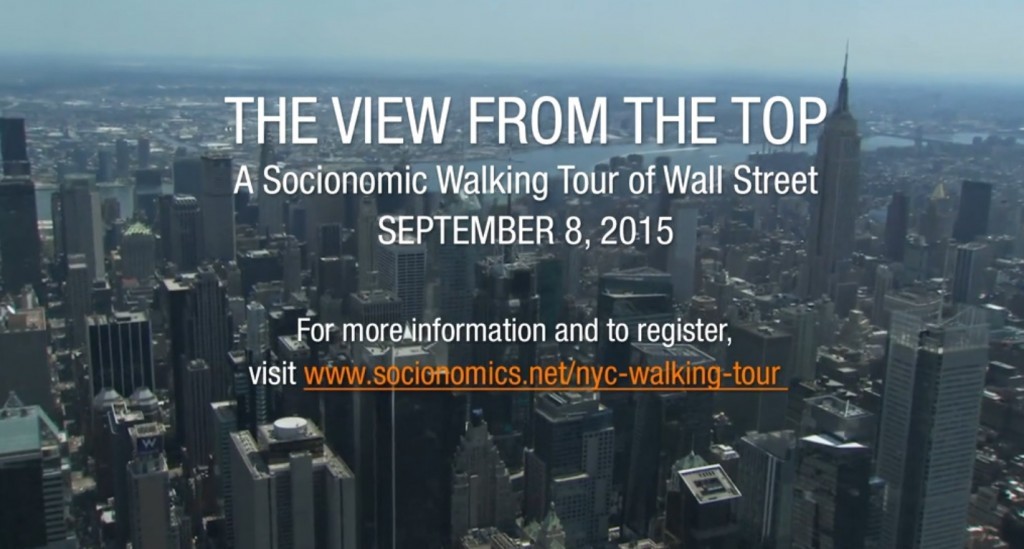 Peter Kendall is co-editor of the monthly Elliott Wave Financial Forecast, where he provides analysis of the US markets and comments on cultural trends. He’s researched a variety of fascinating topics related to social mood and popular culture, including the popularity of basketball and star players, fashion trends, skirt lengths and the acceptance of transgenderism.

Peter led a one-time-only walking tour of Wall Street and Lower Manhattan on September 8 that placed the financial and commercial capital of the world within the context of 200 years of stock market history.

Before the tour, Peter sat down with Socionomics Institute staff to discuss the significance of some of Peter’s favorite sites, including, of course, One World Trade Center.

Socionomics Institute: You’re beginning the tour outside of the One World Trade Center. Can you give us a brief history of that site?

Kendall: When I was a kid, I used to take the train over to that very site and come up into Wall Street. Now, as I have come forward in time and am becoming more socionomically-aware, I’ve come to realize it has a stacked socionomic history. At three different points in time, the same thing has happened there, and it’s happening again at the present point in time. They’ve placed the tallest building in the world on the site. They did the same thing in 1906 — It wasn’t the tallest building, but it was the largest building. And I don’t want to give it away but as many of you may already know, something else happened there in 1966 when they decided to build another set of Twin Towers.

Socionomics Institute: One of the next major stops is The Hub. What is so significant about this train station?

Kendall: The Hub is actually a site that’s under construction, and I don’t really know even what to expect when we get there, because they’ve been working on it for six months. I think it’s one of the more fascinating architectural monuments that we’ll see. As I said, it’s not yet finished. It’s amazing in terms of its visual appeal, and also in terms of its budget; it is the most expensive train station ever built.

Socionomics Institute: You’ll visit the Woolworth and Park Row buildings, which are now being converted to apartments and condos. Why is that the case?

Kendall: Actually, the Park Row building was converted a while back. In fact, it was one of the pioneers of the re-fitting of all of Downtown Manhattan, which is becoming a neighborhood. That’s a very interesting switch, because it was moving in the opposite direction in 1835, and we’ll talk about that when we get together. The Woolworth building is really a counterpoint on our tour to the Trinity Church. Both are Gothic structures, but they have different ends. We’ll discuss the interplay between the two on the tour.

Socionomics Institute: New York City had run-ins with pirates. Can you talk about the famous pirate that is connected with Trinity Church, which is one of the stops on the tour?

Kendall: Well I think I’ll leave that to the tour itself, but we will talk about pirates, and they have an amazingly important role in the history of Wall Street, and particularly Wall Street itself.

Socionomics Institute: You’ll make your way to the Bowling Green — the penultimate stop on the tour. Can you tell us what’s so interesting about New York’s first public park?

Kendall: There’s a few different things. Most importantly was what happened there in 1776 after the Declaration of Independence was read. The mob went down to the park, and poor old King George got treated rather roughly, let’s say. He was eventually melted down.

Socionomics Institute: Lots of parks are popping up along the shoreline. Why is this noteworthy?

Kendall: A park is actually the opposite of a skyscraper. It does however have a similar bull market timing. They tend to appear at tops because people are philanthropic and there’s more largesse in society. We will look at parks as kind of the opposite of skyscrapers.

Socionomics Institute: The tour ends at the Skyscraper Museum, where your tour group will have exclusive access to the exhibits. Can you give us a teaser of what you’ll discuss while you’re there?

Kendall: We’re going to wrap everything up there. It’s going to be an exciting time to kind of go back through everything we’ve seen in chronological order, using the charts that tell us a very interesting story about New York but also about the world.