A Socionomic Look at the Timing of Marijuana Legalization

Back in October 2003, Robert Prechter’s monthly Elliott Wave Theorist made a forecast that the War on Drugs would eventually lead to the decriminalization of the possession and sale of recreational drugs.

The Socionomics Institute’s monthly Socionomist followed up in 2009 with an in-depth story by Euan Wilson called “The Coming Collapse of a Modern Prohibition.” Then, the November 2013 Socionomist published an update called “Marijuana: The Mood Shifts, and Decades of Prohibition Go Up in Smoke.”

The recent rush of new state laws to decriminalize pot bears out these socionomic forecasts. Twenty-three states and the District of Columbia have now legalized marijuana in some form.

Have you ever asked yourself why marijuana laws got more lax now?

Why not twenty years ago?

Why not ten years from now?

Some might blame it on “today’s loose morals,” but there is a better explanation. This excerpt from “Marijuana: The Mood Shifts, and Decades of Prohibition Go Up in Smoke” tells you more.

Marijuana: The Mood Shifts, and Decades of Prohibition Go Up in Smoke
By Gary Grimes, with Euan Wilson
(Excerpt, November 2013 Socionomist)

Like it or not, the longtime prohibition of marijuana and hemp in America is coming to an end. Industries from pharmaceuticals to fabric, fuel to foodstuffs have laid the groundwork to participate in a legal US marijuana market. And with public opinion swinging in favor of legalization in many areas of the country and state lawmakers proposing serious legislation, pot advocates are harnessing the sudden momentum.

Tolerance increased during the bear market of the 1970s, then decreased for 20 years during the bull market. As recently as the mid-1990s, Gallup showed roughly three-quarters of Americans supported marijuana prohibition. But the numbers began to decline sharply following the peak in…stocks in April 1998. From a socionomic viewpoint, this trend reversal pairs nicely with the timing of peak optimism. Elliott Wave International has argued that since 2000 we’re in a prolonged period of negative trending mood at Grand Supercycle and Supercycle degrees. Americans’ growing support for marijuana legalization, now at 58%, is compatible with this idea.

Socionomists were not surprised by the massive reversal. In 2003, The Elliott Wave Theorist forecast the escalation and then end of the war: “The drug war will turn more violent. Eventually, possession and sale of recreational drugs will be decriminalized.”

The July 2009 issue of The Socionomist again updated subscribers to the nearing end of marijuana prohibition in a widely covered report by Euan Wilson, “The Coming Collapse of Modern Prohibition.” One of Wilson’s charts was reprinted by Time and Mother Jones and covered by Yahoo Finance, New Scientist and other major news outlets. It demonstrated that the DJIA correlated with significant milestones in marijuana prohibition over the past 100 years: 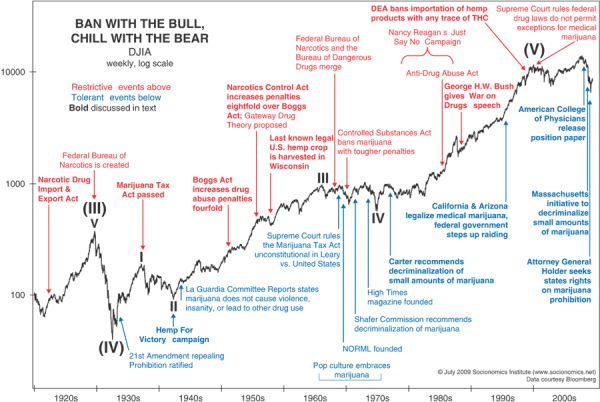 Each legislative attempt to restrict marijuana use followed at least three, and in most cases four or five, bull-market years. In 1937, Congress passed the Marijuana Tax Act. The law banned casual consumption of the drug and limited its use to specific medical and industrial purposes. Franklin Roosevelt signed the law at the top of a roaring bull market, the DJIA having quintupled from its 1932 low. The real crackdown, however, came over a decade later during the massive wave III bull move. The Boggs Act, which increased drug use penalties fourfold, and the Narcotics Control Act, which increased penalties another eightfold, both came during the most powerful portion of wave 3 of III of the bull market. Then in 1958, after four more years of rising mood, Wisconsin farmers harvested the last legal crop of US-grown hemp. In 1989, President George H.W. Bush’s famous “War on Drugs” speech came on the heels of seven years of net progress in the stock market. In 1999, a year before the top of the Grand Supercycle bull market, the DEA banned the importation of hemp products that contained even a trace of Tetrahydrocannabinol (THC), marijuana’s psychoactive ingredient.

Meanwhile, marijuana stocks and myriad peripheral industries offer new risks and opportunities to US speculators. Dispensaries, grow equipment providers and farming and manufacturing are among the industries already legally profiting from changing state laws. The new trend even has a name for the history books: America’s “Green Rush.”

The next big opportunity for official federal decriminalization may be 2016 — the year of the next major US election — especially if stock prices are substantially lower. Any vote likely will be brought by a green crop of legislators whose constituents have given them a mandate to uproot the status quo. 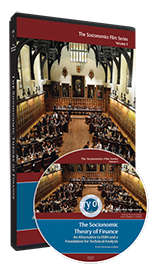 Social mood trends, as reflected by the trend in the stock market, affect ALL areas of our lives

That’s what socionomics, the new science of social prediction, studies.

We recently announced a new recording of Robert Prechter, the Socionomics Institute’s Executive Director, presenting what he considers his “most condensed yet complete presentation on socionomics thus far” at the 2014 IFTA Conference in London.