Get more free insights like these delivered to your inbox

That’s how a skeptic recently brushed off the Socionomics Institute’s view of Brazil’s Zika epidemic. And it’s true, mosquitoes don’t read The Financial Times or The Wall Street Journal. But neither did London cholera, Spanish flu, polio, HIV/AIDS, SARS, H1N1 flu or Ebola. Yet, as the Socionomics Institute shows, each of these major epidemics showed a remarkably similar relationship to stock markets—they erupted after large, extended declines.

And guess what? So did Zika. 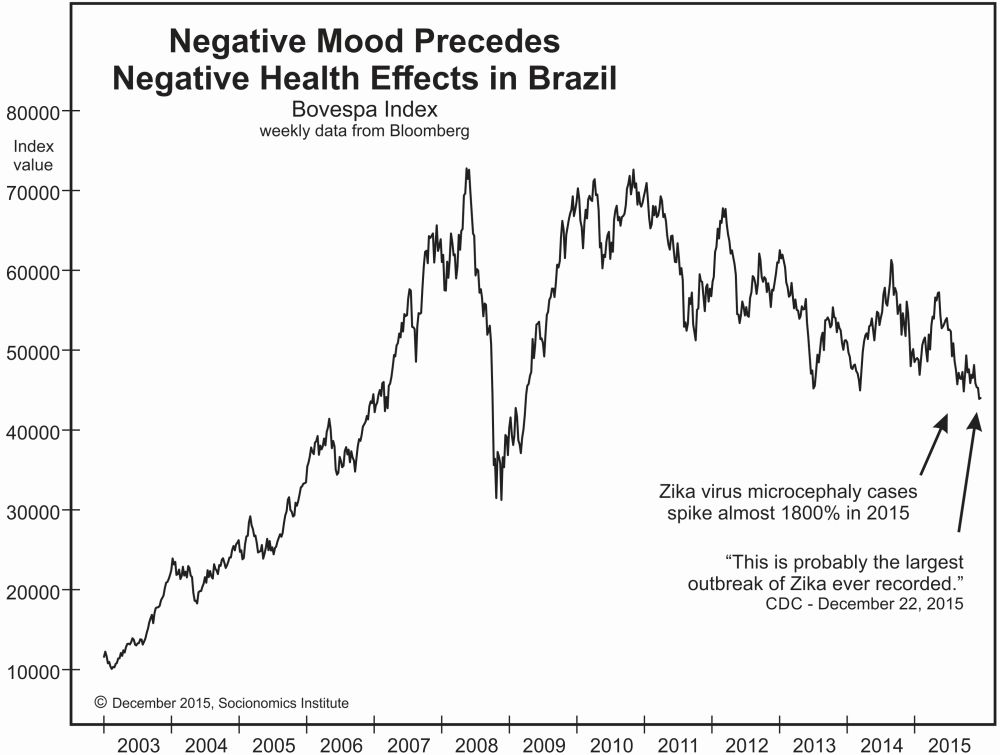 Do stock market declines make people sick? Socionomists don’t think so. Instead, they think benchmark stock indexes are more than just financial records; they indicate trends in social psychology. When societies get depressed, they are more likely to get sick. There are plenty of reasons why this makes sense.

What’s more, a growing number of researchers directly connect declining stock indexes with subsequent increases in negative public health outcomes. Most of these studies cover only short periods of time, but researchers at the Socionomics Institute survey 300 years of stock market data and find that long periods of zero-to-negative net change in stock market indexes tend to precede major epidemics and other adverse public health outcomes.

Health care funding suffers during economic decline, as does public hygiene. London’s mid-19th century cholera epidemics and Brazil’s recent mosquito population boom are good examples of this. And at the individual level, pessimistic psychology, which is what drives stock prices down, has also been directly linked to ill health. Increases in long-term stress appear to be an important component of this effect. The June 2009 issue of The Socionomist said,

The American Psychological Association reported on a 2004 meta-analysis that reviewed 300 separate studies and found:

The most chronic stressors—which change people’s identities or social roles, are more beyond their control and seem endless—were associated with the most global suppression of immunity; almost all measures of immune function dropped across the board. The longer the stress, the more the immune system shifted from potentially adaptive changes (such as those in the acute ‘fight or flight’ response) to potentially detrimental changes, at first in cellular immunity and then in broader immune function. Thus, stressors that turn a person’s world upside down and appear to offer no ‘light at the end of the tunnel’ could have the greatest psychological and physiological impact.

If Zika were Brazil’s only threat today, it would be easier to dismiss this theory. But the rising susceptibility is also evident in the concurrent epidemic of microcephaly, and in the increasing incidence of dengue, chikungunya and the paralyzing nervous disorder, Guillain-Barre syndrome. And while the country is mired in its worst economic crisis since the Great Depression and impeachment proceedings are underway against President Dilma Rousseff, lax hygiene has brewed a toxic stew of viral and bacterial pathogens in Rio de Janiero’s Summer Olympics water venues. It is quite reasonable to propose that changes in social psychology, or social mood, are an important causal mechanism for elevation and reduction in public health risk. Click here to see historical charts that demonstrate this effect.

So, how do you use this information? This is what Socionomics Institute researcher Alan Hall told a number of military and civilian global health professionals in his December 2015 presentation at National Defense University in Washington D.C.,

If you see early cases that could be the beginning of an epidemic, you should assess the social mood of that society. Small disease outbreaks that follow large stock market declines should be taken very seriously. Stock market data are cheap and easily accessible. A society’s stock market is a vital sign of its mental, physical and public health.

A number of countries’ stock indexes resemble Brazil’s right now, which suggests they have elevated susceptibility to infectious disease. Take Russia, for example, where the benchmark RTSI index is about 72% below its 2008 high and HIV/AIDS recently surged to record levels. The country’s AIDs czar said Russia is “on the tipping point of infections becoming a generalized epidemic.”

HIV/AIDS began as a small outbreak in the US in 1981, when the inflation-adjusted Dow Jones Industrial Average was about 68% below its 1965 high—its second-largest decline in history. Understanding the importance of this signal could have saved lives, but the US government officially ignored HIV/AIDS until 1986 when the blood supply was widely contaminated and over half the hemophiliacs in the country were infected. Hopefully, Russia won’t repeat that mistake.

Disease pathogens can hit a country at any time, but they seem more likely to gain footholds and gang up on weakened societies, often producing severe health crises. If the majority of stock markets across the globe continue to trend sideways to down, Hall says society should, “Get set for more Ebolas, more Zikas and more ‘unexpected’ threats to public health.”

Get more free insights like these delivered to your inbox

A billionaire envisions a new city in the American desert. ...more