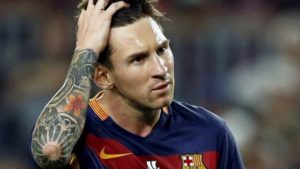 He’s the second-highest paid athlete on the planet and a legendary soccer star. But Lionel Messi faces some very messy-upped money trouble…

A Barcelona court recently found the footballer and his father guilty of tax fraud, and sentenced both men to 21 months in prison. Even so, the law in Spain allows sentences of less than two years to be served under probation — thus father and son won’t go to jail. We first discussed the Spanish governments tax evasion suit against the football star in a Mood Riff back in June 13, 2013 when the IBEX Index was down 49% since November 2007.