By Alan Hall | Excerpted from the July 2016 Socionomist

Every day, we all see people judge their fellows, narrow their awareness and make decisions as if the right-left political dichotomy is the most important way to evaluate the world. The socionomic perspective helps liberate us from the skewed perceptions, “ideological silos” and emotional reactivity of the political mindset. …

Socionomic theory first topples the entrenched belief that politicians and leaders can control their own political destinies. As we have shown repeatedly, social mood regulates many political outcomes. For example, reelection victories or losses reflect not the competence or incompetence of candidates, but the mood of the electorate. …

Secondly, socionomic theory dispels the idea that political polarization is limited to the one-dimensional political spectrum of left versus right; it also includes the opposing views of anarchy and authoritarianism and other ideological positions between these poles. Today, political ideologies are diverging, and they are moving in more than two directions. … 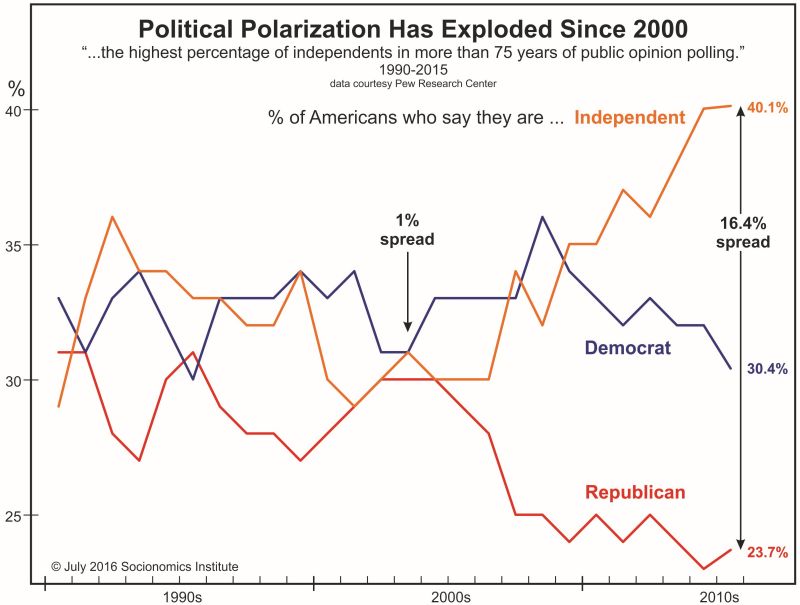 Figure 2 plots Pew Research Center poll data from 1990 through 2015. In 2014, Pew reported, “Currently 39% of Americans identify as independents, 32% as Democrats and 23% as Republicans. This is the highest percentage of independents in more than 75 years of public opinion polling.” In the past 13 years, polarization between the three groups has exploded from a spread of 1% to 16.4%. This is the widest spread since 1983, near the end of a 16-year Cycle-degree correction in the inflation-adjusted DJIA.

In the remainder of this article, Hall looks at U.S. research on political partisanship, political animosity, and opposing parties’ fear and perceptions of one another. He also looks at this year’s Brexit vote in the U.K. and social mood’s role in the process. Finally, he analyzes social mood’s role as the common denominator in both the Brexit decision and in the popularity of U.S. presidential candidate Donald Trump.