[Mood Riffs] The Battle for Mosul 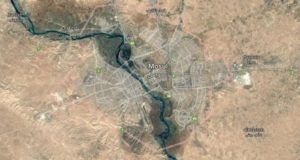 Iraqi Army fighters — with air and artillery support from the U.S. and France — have surrounded the city of Mosul, for what may be a months-long siege to take the city back from ISIS.

ISIS is digging tunnels and strategically rigging the city with bombs. Meanwhile, a dispute has erupted between Iraq and Turkey regarding the presence of Turkish troops in Northern Iraq.

The Arab Spring’s protests, civil wars and sectarian violence still ripple out in a powerful wave of negative social mood across the Middle East.

Read an excerpt from the October 2015 article, “Syria: Epicenter of a Negative Mood Vortex.”

The Socionomist enables you to see trend-shaping waves of social mood, as reflected by the stock market — and capitalize on them. The January issue looks at 2021, mood and advertising, resilience during a social mood winter and life strategies. Mood Riffs topics include speed and facial recognition. Read the January issue instantly when you join the growing ranks of Socionomics Members.