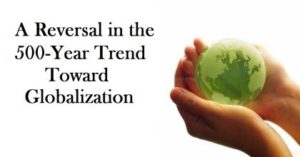 Not since World War II has U.S. trade fallen during a period of economic growth. The total value of American imports and exports declined by $200 billion in 2015, and fell another $470 billion through September of this year.

Brexit happened. The Trans-Pacific Partnership is in tatters. Anti-globalization political parties have risen in polls. These manifestations and others arise from social mood, which regulates our perceptions of other people and our willingness to cooperate with them. The September 2016 issue of The Socionomist takes an in-depth look at the shift in globalization’s popularity.

Read excerpts from this article now