Robert Prechter Wrote a Book to Replace It. 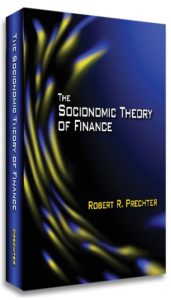 World-changing books about finance aren’t built in a day.

The Socionomic Theory of Finance is in that ballpark, as it required 13 years to complete. It, too, has a lot to say.

Let me speak with words I’d use if I could discuss the book with you in person. Here goes.

I do have a personal favorite chapter of The Socionomic Theory of Finance. It’s Chapter 11, “Falsifiability.” It’s a fast six pages.

This essay goes to the core of what science is, and how to judge if a theory is credible.

Put simply, a credible theory must include testable claims.

Copernicus, for example, said that the earth revolves around the sun rather than vice versa. His claim was testable.

“I am a time traveler from the future.” That claim is not testable.

In other words: Scientific tests make observations and produce measurable results. And that’s exactly what Prechter gives the reader in this chapter. Not simply one or two claims about socionomics, but ten. Many claims under conventional economic theory, on the other hand, are quite famously non-testable.

“If these claims were falsified,” says Prechter, “I would abandon socionomic theory.”

My (Close) Second Favorite Chapter is…

Chapter 41, “Setting the Record Straight About Socionomics.” It’s 16 pages, but, like most of the book’s chapters, it is easy to read in one sitting. This chapter shows that socionomics can answer criticism, clearly and thoroughly.

The non-textbook style makes The Socionomic Theory of Finance a delight to read and re-read. The page count is formidable, yet it’s not a “long book.” It’s topically organized into forty-four dedicated chapters. Each chapter answers a question, solves a problem, or exposes the flawed logic of conventional macroeconomics, all with deep insight.

My guess for your favorite chapter? I suspect that many readers will keep going back to Chapter 5, “Time for a New Model.” Like a great movie, it sticks with you for days.

Or, your favorite could be Chapter 22, “Elliott Waves vs. Supply and Demand.” By the end, I was chuckling with delight at the careful overturning of conventional wisdom in this highly entertaining chapter.

I’ve hardly scratched the surface. Just know that this great book covers a range of topics — from the myth of shocks to who really controls interest rates to the difference between finance and economics to mood, herding and bubbles.

The book also includes 21 essays on socionomics from 12 other scholars, writers, researchers and analysts. That’s exactly how a far-reaching theory of finance should develop.

What Others Are Saying

“The Socionomic Theory of Finance is the best book ever written on financial markets.”

“Socionomic theory is fresh and original. Whatever the ultimate verdict, a revolutionary new perspective and a basis for prediction are just what the social sciences presently need.”

Now make your own judgement. Order The Socionomic Theory of Finance today.