Is there trouble brewing in paradise?

Recently, China has been doing something that’s caught the attention of the U.S. intelligence services.

In the South China Sea, in the Spratly Islands chain, China has been developing airfields, ports, and other facilities across the face of many of its man-made islands.

The U.S. is not the only country paying attention. Besides China, countries like Vietnam, the Philippines, Brunei, Malaysia, Taiwan and Indonesia also hold interest or occupy territory within the Spratly Islands chain. They are concerned about China’s recent construction of what looks like military objects on several of its man-made islands: landing strips, aircraft hangars, and possible air-defense facilities.  On December 20, 2016, an ABC News article said,

“The Chinese government maintains that the islands are for maritime safety and mainly civilian purposes. In a statement last week, China’s Defense Ministry called the new defensive measures ‘appropriate and legal,’ according to The Associated Press.”

“The U.S. government takes no position on the territorial disputes in the South China Sea but it has called for an immediate end to land reclamation.”

In the April 2016 issue of The Socionomist, Senior Analyst Chuck Thompson discussed the potential for conflict in the South China Sea:

“The South China Sea is one of the world’s most contested regions. The body of water is subject to competing territorial claims by China and several other countries in Southeast Asia, including Vietnam, the Philippines, Brunei, Malaysia, Taiwan, and most recently, Indonesia. Though social mood is trending positively in many of these nations, a trend toward negative social mood in China, which claims more than 80% of the Sea’s territory, is fueling the potential for serious conflict to erupt.

“China’s benchmark stock market index — the Shanghai Composite — reflects the country’s trend toward negative social mood. The index is 41% below its June 2015 high and 50% below its 2007 all-time high. China’s negative mood is also evident in its flagging economy and in its escalating authoritarianism …

“In recent years, China has seized many areas of the South China Sea that had been claimed by other nations. In 2012, China took the uninhabited Scarborough Shoal from the Philippines. In 2014, it placed an oilrig within waters claimed by Vietnam. 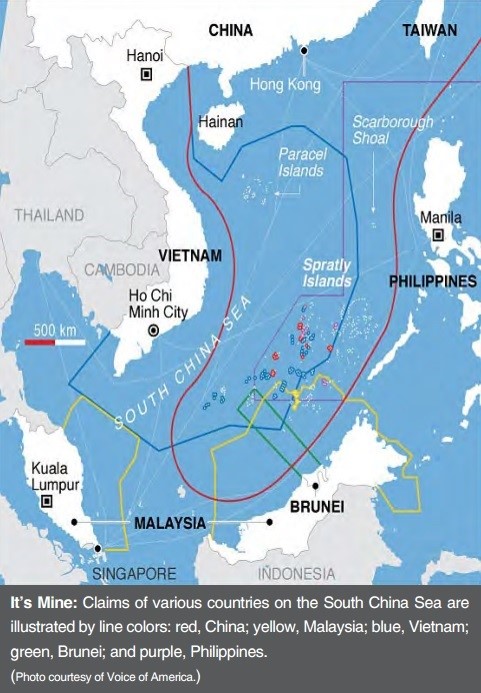 “China recently towed the oilrig to the mouth of the Gulf of Tonkin, off the eastern coast of Vietnam—an affront to Vietnam, which has complained to China’s embassy in Hanoi…

“China has also used dredging to build up 3,000 acres of artificial islands within disputed waters, where it has constructed runways for military aircraft and deep harbors for naval ships. …”

Why is the South China Sea so important? Besides being one of the most important trade routes in the world, with at least $5 trillion of commercial goods passing through the channel each year, it is also a mecca — or at least thought to be — for oil and gas reserves. The U.S. Department of Energy estimates that there are over 11 billion barrels of oil and 190 trillion cubic feet of natural gas in the probable reserves.

With these types of assets resting behind a picturesque landscape, it’s no wonder there have been territorial disputes. Speculation that South China Sea tensions could turn into a military confrontation between China and its neighboring countries — and inexorably draw in the United States — are high. Socionomics offers you insights into when those disputes are likely to intensify.