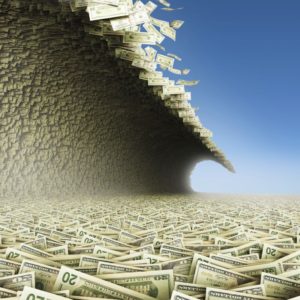 Will the average baby-boomer couple that retired in 2011 really “end up drawing about $200,000 more from Medicare and Social Security than they paid in taxes to support those programs?” That’s the gist of a recent Urban Institute study; as reported by a Washington Post columnist, Baby Boomers “…chewed up resources, ran up the debt and escaped responsibility.”

The October 2003 Elliott Wave Theorist noted, “The demographic argument for a continued boom fueled by baby boomer spending and retirement savings will be transformed […] into an argument that the same portion of the population will be responsible for a continued bust.”

Socionomist Alan Hall surveyed a multi-decade, social-entitlement tsunami – a wave that, like all others, will eventually subside when negative social mood gathers steam.