Spain Divided: What Can the Stock Market Tell You About Europe’s Secession Fever?

Catalonia declares and then suspends its independence from Spain. AFP reports seven other European regions are “demanding more autonomy or even independence.” How did Europe get here? And what’s next? As this excerpt from the just-published book Socionomic Causality in Politics shows, just ask the stock market.

Secessionism springs from the negative-mood impulse to separate and polarize. Secessionist sentiment, therefore, increases during and shortly after major trends toward negative mood as indicated by bear markets in stocks. A secessionist mindset has become evident in Europe ever since the Euro Stoxx 50 index topped in 2000.

Negative mood trends foster social anger in proportion to their degree. Whether belligerents express their anger within a country or against external foes appears to be due to specific chains of events within the chaos of social interaction. One factor—the availability of an external common enemy—seems to be the main determinant of whether conflict breaks out internally or externally. The existence of a common enemy can undercut rebellious impulses. Absent an external foe, a drawn-out trend toward more negative social mood directs anger and division inward, leading to increasingly secessionist expressions.

Examples from the past show this dynamic in action. War with Carthage redirected ancient Rome’s internal conflict for many years. Once Rome defeated its enemy, civil war intensified and the empire began its famous decline. The Spanish-American War of 1898 provided a common enemy that helped Americans heal the residual bitterness between North and South. The 1919 Anglo-Afghan War united long-adversarial Pashtun tribes against the British. The intensity of the Chinese Civil War waned when Japan expanded its incursion from northern China into Manchuria in 1931. When the Russian Empire experienced economic and military collapse during World War I, Finland lost its common enemy and promptly erupted in civil war in 1918. The prolonged intra-political enmity eased when Finns again faced a common enemy in World War II.

Today’s separatist psychology in Europe has drifted far from the unity movement at the peak of positive social mood. The Wave Principle implies that this new trend toward division will eventually reach an extremity opposite that of the peak impulse to merge that brought the Eurozone together. 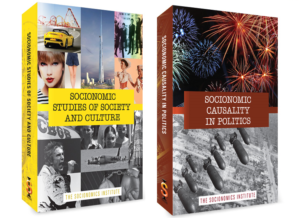 The excerpt is pertinent enough to today. Consider that it was first published in 2010 – long before dissolution of the EU was on almost anyone’s radar!

Suppose YOU had a single framework that allowed you to understand why certain candidates win elections and why nations go to war. And why a country’s internal politics can be peaceful one minute and beset with strikes, protests and terrorism the next. Such is the value of Socionomic Causality in Politics. In a paradigm-shifting work, Robert Prechter, Alan Hall and fellow contributors unveil why politics frequently confound even the most brilliant pollsters, historians, politicians, social scientists and the media—and how you can understand and sometimes even anticipate political changes with one simple shift in your perspective.