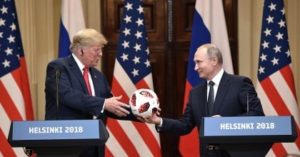 Time Magazine’s July 30 print edition cover will show portraits of President Trump and Russian President Putin merged into one face. Headlines about Russia in 2017 and 2018 include cyberthreats, alleged poisonings, election interference and the Trump-Putin bromance. Ten years ago, Senior Analyst Alan Hall forecast that Russia would grow increasingly belligerent toward the West. Today, democracies are increasingly alarmed about the “dark side” of Vladimir Putin — including efforts by Russian intelligence to ally with U.S. politicians. In March 2017 Alan said, “I don’t think this thing is going away anytime soon.”

A socionomist understands these developments in the context of a long-term trend in social mood.

Our published peer-reviewed paper, “Behavioral Finance Beyond the Markets: A Real-Time Case Study of Russia’s Military Resurgence,” provides you with a socionomic perspective.