Cruise to the Top 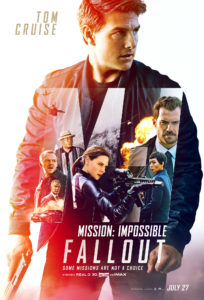 It’s unanimous: At the box office and among critics, Mission: Impossible – Fallout is a huge thumbs-up. The film is Tom Cruise’s sixth in the Mission: Impossible series, and, according to reviewers, “shockingly” improves upon earlier efforts and “raises the bar for every action film to come after it.” The debut weekend earned $61.5 million, the series’ best opening weekend and second-highest of Cruise’s career.