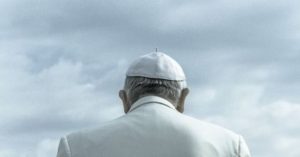 As an increasingly dark cloud of sex-abuse scandals gathers over the Catholic church, disillusionment is shrinking the number of faithful. A Vatican adviser confesses this is the “summer from hell.” This week, an Archbishop said that Pope Francis himself is complicit in covering up the crimes.

A 2015 Pew survey found that the Catholic church has lost more members than any other faith in recent decades, even as congregants are reducing their financial support.

Social mood in the US has trended positively at a large degree for most of the past seven decades, producing visible effects across generations, genders and ethnicities. Here’s your chance to explore the socionomic perspective AND learn how religious belief will shift during the next large-degree negative mood trend.

In this excerpt from the August 2015 Socionomist, Alan Hall explains how a long-term positive social mood trend contributes to a secular shift