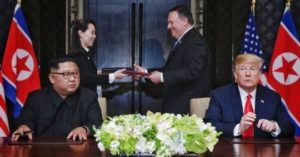 The June 12 Singaporean Summit between two “nuke button” adversaries, Kim Jong-Un and Donald Trump, was a shimmer of optimism for the Korean peninsula. But recent reports say North Korea is upgrading its nuclear program, which could thwart a lasting peace. Denuclearization talks were “again at stake and may fall apart,” according to a letter sent from North Korea to the United States. Hours after the U.S. announced a trip by Secretary of State Pompeo to North Korea, President Trump called it off.

Socionomist Chuck Thompson explains how seasons of strong cooperation among countries tend to come in periods of positive mood, while times of intense conflict and aggression unfold when mood is negative.