By Alan Hall | Excerpted from the September 2018 Socionomist

The October 2004 issue of The Elliott Wave Theorist said the impulses of most serial killers appeared to be activated in periods of increasingly negative social mood. The July 2009 issue of The Socionomist said murder is “an expression of anger and the urge to destroy.” It said that from a socionomic perspective, “it seems reasonable to expect murder rates to go up during periods of negative social mood.” The September 2018 issue builds on these observations by taking an in-depth look at the correlation between negative mood and the actions of well-known serial killers. Following are excerpts from that issue:

Chapter 57 of Socionomic Studies of Society and Culture begins,

What do Richard Speck, Charles Manson, the Zodiac Killer, John Wayne Gacy, Ted Bundy, David Berkowitz, Jim Jones, Wayne Williams and Gary Ridgway have in common? They are all famous U.S. serial killers who struck during the period of negative social mood lasting from February 1966 to August 1982 as indicated by a bear market in the Dow/PPI over that time. …

Just as negative social mood may influence serial killers to act, positive social mood may help explain why they quit. For example, Socionomic Studies of Society and Culture noted that in the early 1980s, Gary Ridgway “sprung into action at the bottom of the 16-year trend toward negative social mood, continued until the first setback ended two years later, and then retired except for a couple of single murders during smaller stock market declines.” 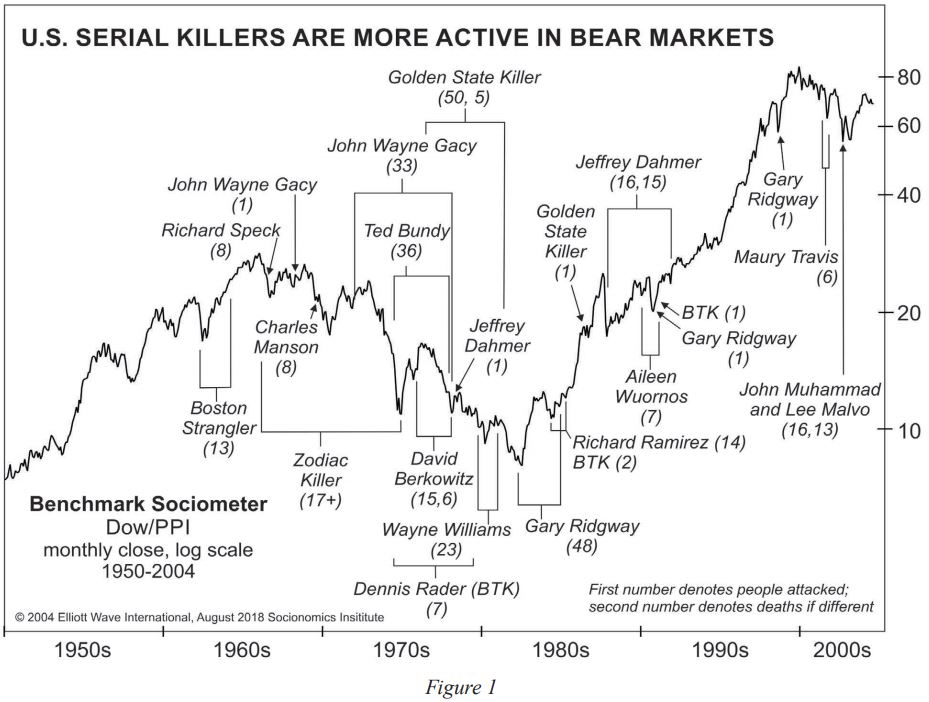 An April 26 New York Times article titled “Do Serial Killers Just Stop? Yes, Sometimes”, and cited a 2008 F.B.I. study that found serial killers “may quiet down when they find other outlets for their emotions. … In some cases, jobs and families might have stabilized and exacerbating sources of stress might have faded.”4 Positive mood provides more stable jobs and families, more positive emotional outlets and reduced sources of stress, which may ultimately lead to a cessation in killings. …

From Serial Killers to Authoritarianism

DNA testing has been a part of law enforcement for years. People shed DNA like cats shed hair, and it is relatively easy to collect. … The Newborn Screening Test has collected blood samples from babies since the 1960s, and it is mandatory in the U.S. and in Canada unless parents opt out. A 2011 article in Nature says the test is “generally viewed as one of the most successful innovations of the modern era,” because it can spot “rare genetic and endocrine conditions that can be harmful or fatal if they are not caught early.” But the article also quoted an activist that said, “I realized that newborn screening was not just newborn screening–it was genetic testing.”12 In 2009, the Director of the U.S. National Institutes of Health warned, “Whether you like it or not, a complete [genomic] sequencing of newborns is not far away.”13

Crime-solving via genetic surveillance offers the tantalizing vision of improving human behavior by deterring criminals. Yet it may prove as seductive as the eugenics fantasy of improving the human gene pool in the late 1800s and early 1900s. (See the November 2009 issue for a socionomic history.) The urge to improve humanity by controlling who can propagate accelerated during several bear markets. It developed into the worldwide eugenics movement and culminated in the Holocaust. …