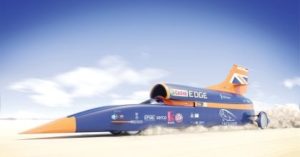 The Bloodhound is a supersonic rocket-powered vehicle aiming to smash the existing landspeed world record of 763 mph with the ultimate goal of achieving 1000 mph by 2020. It’s successor, the Thrust SSC, achieved the land speed record on October 15, 1997 and was also the first land vehicle to officially break the sound barrier. But the privately-invested venture may end with a thud if funding of £25 million is not secured.

An apt analogy is the construction of tall buildings. Developers tend to announce massive construction projects at positive social mood peaks and delay or cancel these same projects during the subsequent negative mood phase.