Did The Moody Grinch Steal Christmas?

In December 2006, I wrote a tongue-in-cheek piece for EWI’s Market Watch page that explained the correlation between society’s mood as reflected by stock prices and the height and number of lights on the National Christmas Tree.

This year, the DJIA has declined since October, and stocks continued to plunge on Christmas Eve, an event some media outlets called the “Nightmare Before Christmas.” Likewise, the National Christmas Tree also reflected the dour mood, as it was dark for three days because of vandalism and a partial government shutdown. In 2013, I updated my 2006 story, which is long gone from the web, and added a chart of the “National Christmas Tree Indicator” (NCTI) that included data on tree height and the number of lights since 1923. The NCTI is a less-sensitive meter of social mood than Dow/PPI, but across several decades still reflected the waxing and waning of festive sentiment.

Hoping to update the height and number of lights of the current tree, I visited the timeline page at https://thenationaltree.org/visit-the-tree-2/event-history/, but it only extends through 2015. So, I visited the National Park Service’s National Christmas Tree webpage, which led me to another indication of the national mood. When I followed the link to “Learn more about the history of the National Christmas Tree,” I landed on an official U.S. Department of the Interior login page that warns,

By logging into this agency computer system, you acknowledge and consent to the monitoring of this system. Evidence of your use, authorized or unauthorized, collected during monitoring may be used for civil, criminal, administrative, or other adverse action. Unauthorized or illegal use may subject you to prosecution.

Scrooge would love it!

So, here for your enjoyment is the 2013 article. Merry Christmas, Happy Holidays and Happy New Year to you all!

The National Christmas Tree has a fascinating history, especially at Christmastime. Like the price of gold, the height of the Tree has actually been “regulated” at times. 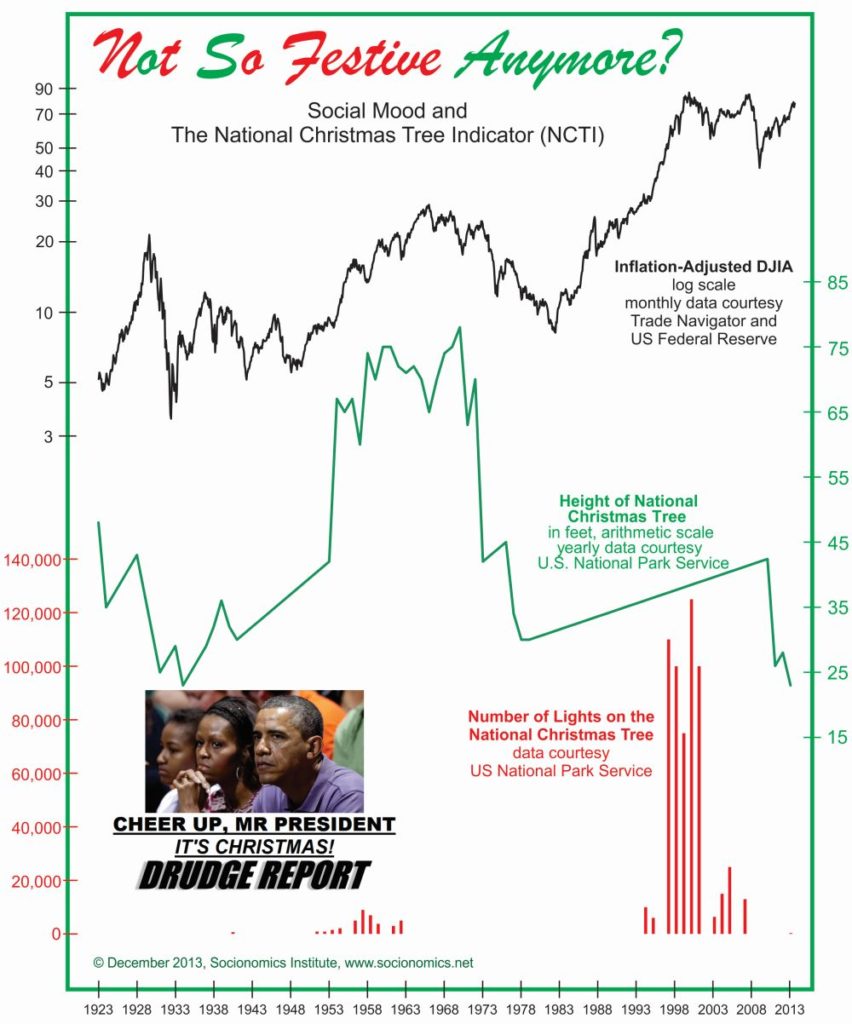 The chart clearly shows that, until the mid-1980s, the most bullish periods in the Dow correspond with the tallest trees. Selected from around the country, these trees were in turn cut and trucked to Washington. For example, the 30-foot Colorado blue spruce planted in 1977 during the Carter presidency is still alive and has grown to about 42 feet in thirty years. The NCTI was a useful leading indicator of the stock rally from 1948. The 1993 break of the 1965 high in the Dow/PPI was unconfirmed by the NCTI, a bearish signal.

The only light description we could find for the 2008 tree mentions “thousands of lights.” Even though the new LED technology reduces power consumption and increases the longevity of lights — lowering the overall cost of lighting the National Christmas Tree — the numbers of lights on the tree are declining, exactly as we would expect when social mood shifts toward a desire to conserve.

And while we couldn’t find data on the height of the 2012 tree, we did find a picture of the lighting ceremony. The picture didn’t show the top of the tree, so we projected the apex and used Barack Obama’s 6’1” height to estimate the tree height. By our rough estimation, the tree didn’t exceed 23 feet, even with a star on top. We used the same technique this year and it appears the tree is now about 26 feet tall.

We hope you have happy holidays.