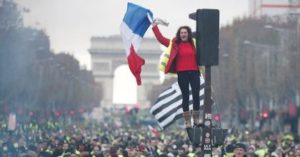 In the worst street unrest in Paris since 1968, angry rioters torched cars, broke windows and looted shops. Hundreds have been injured, four killed and scores arrested. The fuel-tax protests morphed into a broader anti-Macron movement, with more protests planned. The fuel tax was delayed, and it made no difference. It was not the reason, just an excuse.

History has a habit of repeating itself. Learn how social mood sounds the drums of revolt