India vs. Pakistan: Kashmir in the Hot Seat (Again) 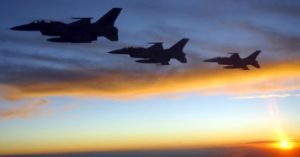 Kashmir is a historical hotspot of conflict, and now animosity between the two nuclear neighbors has surged again. In February Pakistani militants suicide-bombed Indian paramilitary inside Indian-administered Kashmir. India retaliated with aerial strikes in Pakistan-controlled territory — the first time warplanes have crossed the de-facto border in more than 40 years. The situation has only escalated with each side shooting down fighter jets and live-fire skirmishes broke out along the Line of Control.

See how a socionomic perspective is instrumental during periods of unrest and conflict.

P.S. The hastily arranged 1947 India-Pakistan Partition upon Britain’s exit offers an interesting historical parallel. See the new, March 2019 Socionomist for a discussion on how “rhyming” trends in social mood preceded Britain’s exits from both India and the EU.