By Chuck Thompson | Excerpted from the June 2018 Socionomist

Do recessions diminish couples’ desire to have children? If you believe that events drive social expressions, your answer would be yes. However, socionomic theory posits that both conceptions in the aggregate and recessions are products of social mood.

In the June 2018 Socionomist, Chuck Thompson reviews new research that bolsters that thesis. Read an excerpt of his article below.

In 1999, Robert Prechter discovered that conceptions tend to decline before recessions begin, a point with which a new study from the National Bureau of Economic Research concurs.

The NBER paper, authored by Drs. Kasey Buckles, Daniel Hungerman and Steven Lugauer, is titled, “Is Fertility a Leading Economic Indicator?” It says that the growth rate of conceptions

… declines very rapidly at the beginning of economic downturns and the decline starts several quarters before recessions begin. This pattern holds in the United States for the Great Recession as well as for the recessions beginning in 1990 and 2001.

What Socionomics Says About Conceptions

In “A Socionomic View of Demographic Trends, or Stocks & Sex,” published in the September 1999 issue of The Elliott Wave Theorist, Prechter observed that most researchers presume that the economy, politics, peace and war, demographics and other social events influence people’s thinking, and therefore the social mood, and therefore the trend of the stock market. But he proposed that

… social mood is endogenous and patterned, the result of cooperating impulsive human limbic systems. The result is a patterned series of waves of human social mood, which in turn determine the character of social and cultural events, including economics, politics, demographics, peace, war and culture.

It was this insight that drove Prechter to investigate social mood’s influence on conceptions 19 years ago.

In his 1999 study, Prechter also compared conceptions to the advance-decline (a-d) line. The line is an indicator of stock market breadth, a cumulative measure of the net proportion of stocks advancing each day on the New York Stock Exchange. Figure 2 is an updated version of this chart. 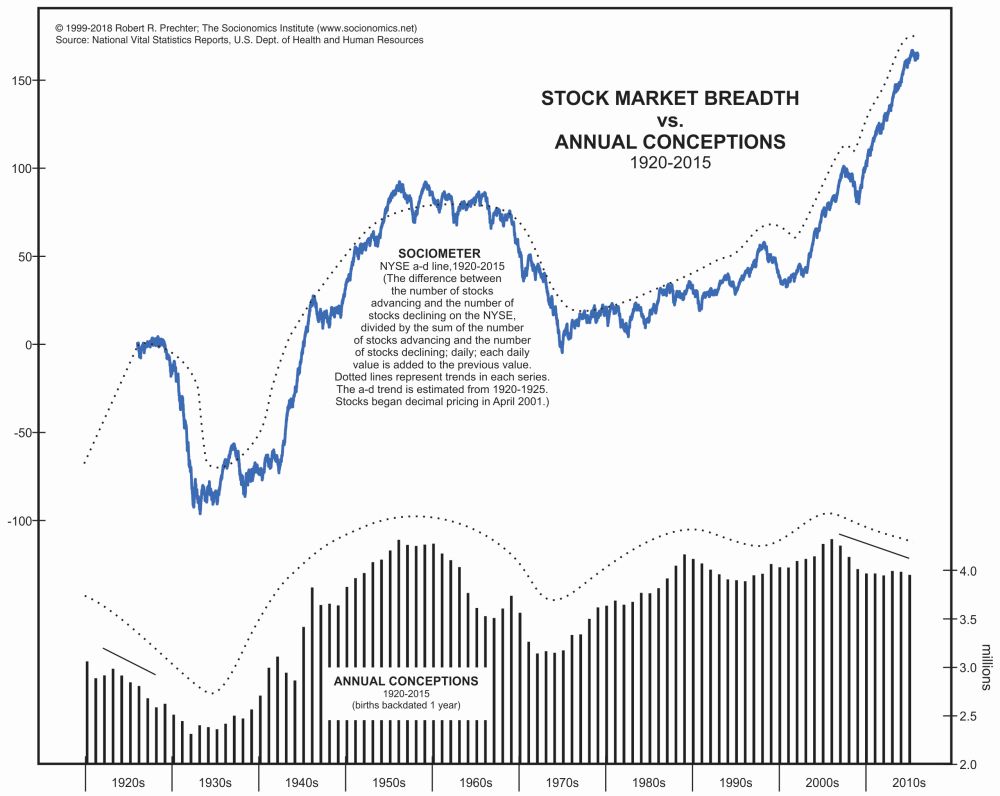 The data showed that conceptions, like the a-d line, tended to decline before major market tops. Regarding the economy, Prechter wrote,

This correlation means that trends in conceptions significantly precede expansions and contractions in the economy, which lag the a-d line, usually by years. Most noticeably, the lows in procreation coincide with stock market lows, not economic lows, which follow shortly thereafter.

Prechter suggested that based on this evidence, social mood regulates not only the stock market but also aggregate impulses to procreate:

This socionomic perspective reveals why the trends of the economy lag trends in both the stock market and procreation. … The key word is feelings, which originate in the limbic system. In the social aggregate, increasing procreation results from increasing feelings of confidence more so than with actual family economics. In the aggregate, procreative decisions, like stock buying decisions and leader selection, are more commonly impulsive/emotional than meditative/rational.