With New Autobiography, Tiger Aims to Set the Record Straight 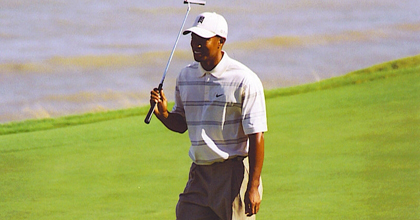 Tiger Woods is writing a book titled Back, in which he hopes to correct what he views as misinformation about his career. “I’ve been in the spotlight for a long time, and because of that, there have been books and articles and TV shows about me, most filled with errors, speculative and wrong,” Woods said.

As noted in Socionomic Studies of Society and Culture, Woods “turned pro in 1996 and quickly became the world’s most respected golfer.” But months after the markets bottomed in 2009, a minor one-car auto accident in which he was involved “mushroomed into allegations including serial infidelity, alcoholism, drug abuse and more.”

Positive-mood personalities must tread carefully when social mood shifts to negative, as Woods quickly discovered. Today, with U.S. markets hovering near all-time highs, Woods is back in the limelight. Last year, he claimed his first PGA tour victory in half a decade — a feat that Today’s Golfer called the “greatest comeback of all time.”

After Woods’ victory at the 2019 Masters, his former caddie said the win would re-energize the sport of golf. But like Tiger, golf’s fortunes are also at the mercy of social mood.