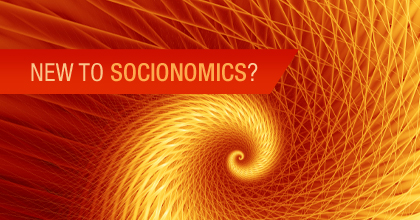 What is socionomics? Socionomics is a field of study conducted under the hypothesis that waves of social mood motivate the character of social actions.

What is social mood? Social mood is a shared mental state among humans that arises from social interaction. Social mood predisposes individuals in the group toward emotions, beliefs and actions. It fluctuates constantly in a fractal pattern. It is unconscious, unremembered and endogenously regulated.

How long has socionomics been around? Robert Prechter began developing the idea in the 1970s, and it first reached a mass audience in a 1985 cover article in Barron’s. Since then, researchers have applied the hypothesis to explain events including election results, trends in popular culture, the timing of epidemics and pandemics, the emergence of prohibition movements, and financial manias and crashes.

Can I take a university course on socionomics? Yes, at one university that we know of, the College of William & Mary.

Is socionomics an accepted academic field or is it still emerging? Prechter and others have authored books, articles and peer-reviewed papers about the theory and its application. Socionomists have presented at multiple academic conferences including the Academy of Behavioral Finance and Economics and at a number of universities including the London School of Economics, MIT, Georgia Tech, SUNY, the University of Cambridge, the University of Oxford and Trinity College Dublin. But, like behavioral finance and other new fields, it is a long way from being “mainstream.”

How can I learn more? The resources below are a great place to start.

In this engaging interview, Robert Prechter explains the socionomic premise and how he developed it. Read the interview.

Chronicling the new and revolutionary science of socionomics, History’s Hidden Engine is the result of more than three years of research and filmmaking by David Edmond Moore. In just 59 minutes and with the help of news footage, popular songs and cultural images, this documentary explores how social mood drives trends in movies, music, fashion, economics, politics, the media and the stock market. Moore traveled North America to capture the insights of 17 thinkers at the vanguard of socionomic research. Watch the Video

The 5 Tenets of Socionomics

This PDF lists five tenets of socionomic theory as well as a few items to remember as you begin to “think socionomically.” View the Tenets

Socionomics in a Nutshell

This landmark paper by Robert Prechter and Wayne Parker, PhD., proposes a new model of finance. Originally printed in the Journal of Behavioral Finance, you can now access it for free. Read the Report.

Want to learn even more? Sign-up to receive weekly socionomics updates. You’ll get several additional fascinating (and free!) resources to help you understand this fast-emerging field.

All the best as you begin your journey into the intriguing world of why societies do what they do.

Back to top
mobile desktop